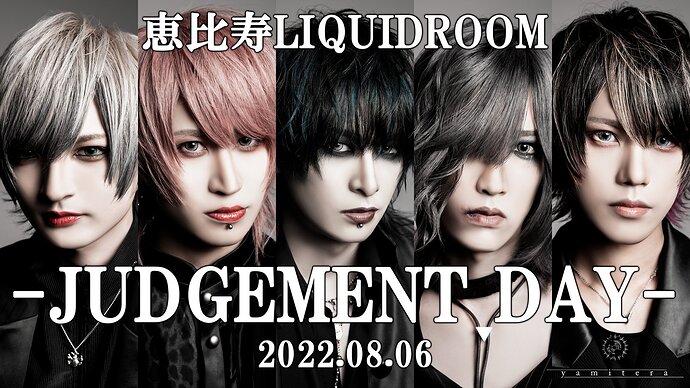 Yamitera posted a video on their channel:

It roughly says that they will hold a free 5 years anniversary live and if 300 people won’t gather, they will disband (?). If someone will translate it correctly, I’ll be grateful.

the new visuals look nice. But Damn this announcement video is trash!
they completely overdo it with the slamming sound!

we’re really back to this shit again huh

Yeah they really say, if we don’t get 300 visitors we will disband.
Eh guys… do you even have a heart for music? that’s not about having lots of fans but having a heart for music, even if its only 1 fan to play for.

that’s not about having lots of fans but having a heart for music, even if its only 1 fan to play for.

guess then even not

Don’t know because I don’t know what their reason for a disbandment were. First thing I think of is money. Sad reason but a realistic one in a capitalst system.
Maybe there’s enough heart already but that won’t ever pay any costs.

If you are a real musician you don’t give up on that. I know enough bandman who are working shitty jobs daily and live not a rich life but still stand on stage.

I don’t think its only money, but also a spirit you need to have to surrvive in the hard visual kei world.

Weren’t you the one who was about to give up translating and shutting the site down because there was too little recognition to your work? Does that make you not being a real translator? And where’s the difference to what you blame the band for?

There’s tons of reasons why some people might be capable of doing anything just to go on while others aren’t. Not everyone is as reilient as others. But as long as they don’t say it’s just about money it’s pretty judgmental to come up with saying things like that. They can put all their heart into the band but still something can prevent them from going on.

I myself dislike announcements of that kind actually. They feel like a threat. But then I think it’s also a hint on how severe the situation is. That might change nothing. But maybe some fans who wouldn’t go now but for another live reconsider so there will be another live at all.
Speaking of fans, does it make a fan to be not a real fan, if they don’t go now because there’s something in their life that keeps them from doing so and by this they don’t support the band enough?
Things aren’t just one-sided and it’s pretty easy to judge people without knowing all details.

And to not spam a single band’s thread further I’m out of that discussion (because I actually don’t care about the band, but that’s something that was on my mind in general before).

(Ah… translating isn’t the real reason why I wanted to the site shut down. It’s just that my own life spirit is almost empty, so my full life feels a burden right now, just everything is too much, I feel burned out to the max, but there are other topics for that)

So they can say; We wanna have 300fans on that day to continue.
However…
Where is your spirit right now? will you really continue for much longer if there will be 300 fans? Will it be really enough to continue, what about lives after that? Maybe a bunch will keep going to almost all your gigs.

However, looking at other bands who said a similar thing “money” always was the reason.

Why would money be the issue if the concert is free? To me, the answer is much more simple. They’re testing the waters, seeing how many fans they have in total. 300 is an arbitrary metric. Bands have not made the cut before and still decided to stay together because being 12 fans off their mark wasn’t that big a deal at the end of the day. They just want to see if they have any fans, and if they don’t have any fans maybe their musical energies are better spent in other projects. Honestly, I have not heard of this band before this announcement and they’ve been around 5 years, so that already says enough doesn’t it?

if the concert is free?

concerts aren’t free…I’m pretty sure that this day will have an paid S ticket, which gives you some cheap “DVD bonus or so”. So after all fans pay.

edit. It’s going to be the next year.

There was an anniversary live.

Today August 6th will be the official start date of Yamitera
I am grateful to everyone who has supported me so far, thank you very much.

Next year, August 6th, I will definitely reach my goal and move on to the next stage.

Thank you for your continued support.

No no the disbanding date will be in 2022, on their 5th anniversary.

huh? they didn’t said that anywhere… 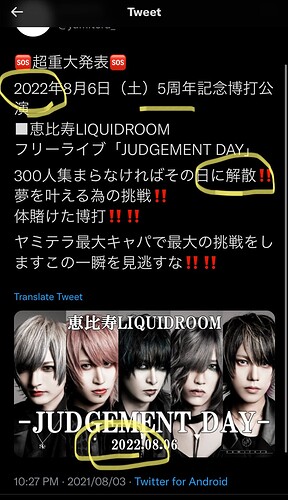 am i missing something??? idk if they’re really gonna do the whole disbanding business, but the event definitely didn’t occur yet, like another poster said

I revived the thread because i remembered someone posting about this, but another band i follow posted about playing a 2man with them this week, so i was

it says, if there won’t be 300 visitors they will disband

Yes, i was replying because @Owl said that the live event that required 300 people already occurred, but it didnt. This year they celebrated their 4th anniversary. Just clearing things up for anyone who was confused like me