There doesn’t seem to be English subtitles available (for now at least) but they got 251 submissions for the audition and seem to be making this into a series.
This first video only has a few clips highlighted, does anyone in particular jump out to you?

Really liked the dude that put himself into the Watch me burn PV
All the submissions so far sound great, I wonder if any local talent we know of decided to audition.

The participants are great till now
One of the japanese ones should be from Bloom in the Crevasse.

The only thing that bugs me, is the missing english subtitles. They have foreigners competing and they know they have enough foreign fans, i dont expect them to translate it to french, german, or whatever, but at least english would have been great.

I thought they might add subs later but still nothing…

This first video was easy enough to understand even without subtitles, but the next video seems to be live try-outs. It’d be nice to understand those conversations since there’s probably going to be a lot of feedback and why-would-you-be-a-good-pick-for-us questions.

I thought they might add subs later but still nothing…

We could be a-holes and interpret the missing subs. But tbh, i think their organzation online is just a complete mess.

On another note, could you see Crystal Lake with a foreign vocalist??

I don’t think they’ll pick a foreigner. I mean look at the lack of English translations of this process they would just have an easier time picking another Japanese person.

Or if they do pick a foreigner it would be another Asian that speaks pretty good Japanese.

I’m still a bit bummed out about Ryo, so foreigner or not it’ll take time for me to get used to the new vocalist lmao
I think the new singer will be Japanese, in part because there won’t be a language barrier, but I also imagine that once they’ll get new stuff recorded/released they’ll start touring in Japan first. It just seems more convenient to have all the members living in the same country (I suppose a foreigner could move there but then there’d be visa issues and whatnot? idk, I’ve never moved to another country)

They most definitely liked the foreign talent the most from their reactions but I too think they’ll go with a japanese person because it will be an easier transition for them. But for sure its possible to get a work visa for entertainment purposes just need a sponsor. Anyone know how good the members are with English and also is their catalog mostly English?

So the japanese vocals i am aware of that did audition are from
Bloom in the Crevasse
one of the Vocals from Elysium
Vocalist of Sanctus
And the korean dude is this one https://twitter.com/MINATO_iyf
If anyone can add anyone, please, feel free to do so.
Its difficult if you dont know the faces always of bands you listen to.

Nice to see everyone here agreeing on the same.
I don’t see them with a foreign vocal either.
In that part i think it’s less about skills, but about who will they be comfortable to work with. 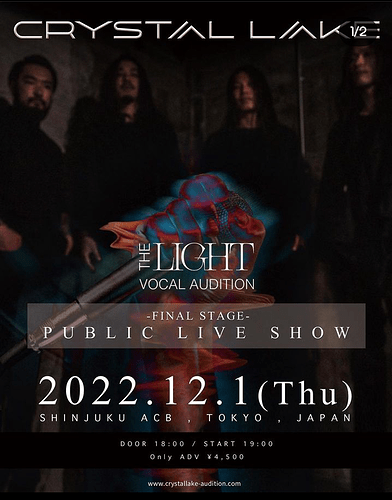 Now that was fast. Let’s see in the next video who they got. I’m sure there won’t only be Japanese singers, but people from neighboring Asian countries as well.

Didn’t Ryo write most of the lyrics while he was in the band? He certainly seemed to be the best speaker. I have no real idea of how good the other guys are with English, but I remember seeing one or two instagram lives from YD where he answered a few comments in English. Also they toured the US pre-covid with Erra and some other groups and they seemed to get along well (I’m purely basing this on a couple of instagram comments/stories I’ve seen). They’re probably (at least somewhat) conversational in order to make friends on tour?

Honestly I’m just glad they’re not dragging this out for too long. I assume they’ll put out the next video this weekend so they can do this next week.

Anyone know how good the members are with English

They all do seem to be somewhat conversational in written english. I have no idea about their talked english.

Add enough alcohol and no cares about the language

Just to clarify, thats a bit of a joke.

New video is out

So for the foreigners they got a translator sitting with them. And of course we have no subtitles.
Also they are kinda awkward cut. (i am writing meanwhile still watching XD)

They had videocalls for the foreigners.

Thanks for posting! I wanted to post this as soon as it came out, but I locked myself out of my apartment and getting the spare key was a hassle and a half

I’m also commenting while watching, the translator was expected but also what makes it almost a given that their pick will be Japanese, even if someone was willing to move to Japan (or if they managed to do everything via zoom) the language barrier is still something that would make working together full time quite hard.
That said, I don’t know who’s my favorite out of the Japanese participants. Maybe Jeong Minhwa?

Finished the video. Even though they seemed to ask all the foreigners if they’d be willing/able to move to Japan, it still seems unlikely to me that they’d end up choosing one of them. Idk, I guess we’ll see what happens on Thursday. Is anyone here in Japan/able to go? It’s probably going to be a lot of fun

On a different note, I found out a while back that Gaku is a '93er and now I feel really old and unaccomplished lmao

Thanks for posting! I wanted to post this as soon as it came out, but I locked myself out of my apartment and getting the spare key was a hassle and a half

Don’ mention, i hope everythings fine for you again.

On a different note, I found out a while back that Gaku is a '93er and now I feel really old and unaccomplished lmao

Thats how i feel listening to tons of bands younger than me XDDD
but Gaku seems to be a bit of exception, he started with nocturnal bloodlust when he was, i think 15

The foreigners needed a translator and i can’t see them sitting in a studio, trying to record and constantly needing to have a translator talk in between with the both sides.
Also what will a foreigner do during an MC in a live in japan?
ok, maybe they could let one of the other members talk instead

But yeah, all over i still dont see them with a foreigner

Don’ mention, i hope everythings fine for you again.

Oh yeah, everything’s fine, an hour long detour was a pain but at least I got the key

The foreigners needed a translator and i can’t see them sitting in a studio, trying to record and constantly needing to have a translator talk in between with the both sides.

This would be my main worry, you can’t really draw graphs or example pictures etc in music. Exchanging feedback during the recording process would be hard, especially since Japanese and English both have unique phrases and expressions, and some things might be hard to translate.

Maybe it was the setting there but is it me or did the local talent seem a little lackluster compared to the foreigners? The only ones that stood out were the Korean singer and the singer after. Most of the zoom calls were much better and higher energy by comparison.
Anyways if I remember correctly you had to have at least a B2 level for Japanese as a prerequisite so the foreigners that don’t know Japanese are mostly just for show I guess.