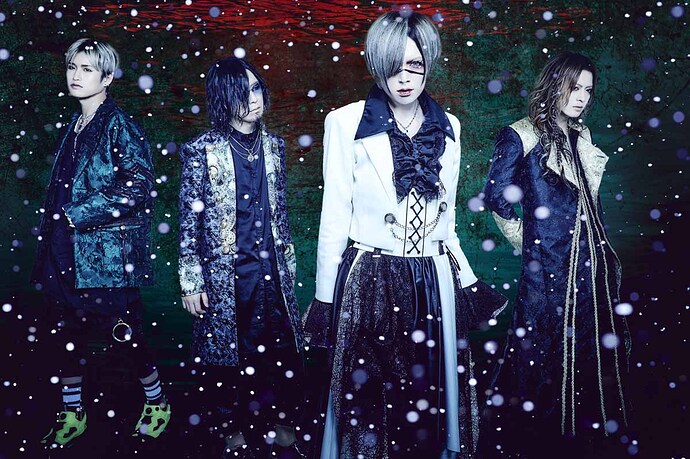 Diaura remains one of my favorite VK bands despite how their sounds have changed over the years. My personal favorite album from them is Genesis as it has some amazing classic songs from them! I remember how popular the song, Lost November, was when it first came out.

What are some of your favorite songs/albums/releases by them?

Oh yes! <3
Lost November was brilliant! I liked Lily & ホライゾン too.
For me, there are barely songs that I don’t like of them ^^

Favourite release is probably the albums GENESIS and FOCUS

And also their first take of their demo 失翼の聖域.

I only listen to one song of theirs but I love that one so much and this is SIRIUS.

I’ve started to listen to more of their stuff recently. I don’t know how I feel about them yet. Their vocalist is pretty good though.

I really like most of their stuff up to the My Resistance mini especially Genesis, Focus and Incomplete. They still have some great stuff after that but most of it is not for me

I do agree although i think the My resistance release is a little sub par. I dont know why i just cant get into Tousakushou Resistance all that much i feel like something is missing when he hits those high notes.

Some songs after the my resistance release for me that is worth noting is the Noah/Shangri-La release, Suna no Tou-Tower of Imitation-, Rosary, Toui Haru, IDEA-Genjitsu e no Kaiki-, is DEAD, Malice, Human noise.

I do recommend to give the Versus album a second listen some stuff on there isnt bad its a decent ish album. Obviously not there best. At first i didnt really think much of it until later on for some reason. For me 2018 is when i stopped listening to the band. Im prob going to purchase the Incomplete 2 album tho. I wanna see some of them remasters

Listening to Incomplete II, it does seem like a good collection of songs for this era of the band. Particularly the first disc. I would have definitely added イカロスの夢 and 白と蒼の境界 though, they’re both fantastic tracks

Yeah it’s a great album, also love the sound quality improvements like of the track ENVY. It’s clearer and louder than the single-CD ver.

As for the 2nd disc there are some great tracks on there as well!

Just recently bought the Incomplete II. They did a great job on it. Some songs sound the same but overall. most notable songs are: Awakeness dive, INFECTION, CRIMINAL BEAST, 君へ黒の花束を, GARDEN, FAKE[s]. Some of these are new some just sound more better on this album.