This time JRNR would like to introduce ANSIFLE, a fairly new visual band from Osaka and formerly active as session band O-MooN. They were kind enough to tell us about their start and their goals as ANSIFLE with a lot of passion! Their concept is that they wish to fill the holes in someone’s heart. After reading this interview, I hope you’ll check them out!

ANSIFLE, thank you very much for your answers in this interview!

・ You guys started as a session band named 「O-MooN」. Why did you decide to switch to a formal band? Please tell us the reason why you changed your (band/member) name.

As O-MooN we also covered songs of other bands, but our own desire to perform our own original songs became much stronger, so we made the choice to change to a formal band. We changed our band name and also member names because we wanted a brand new start from “0” to a new band of “5” members.

・After starting your activity as ANSIFLE, you have also performed as “O-MooN”(02/18). Are there more differences than just the “band name?”

The songs we performed are different because O-MooN was mainly a cover band. On that day, at the show we performed as O-MooN, we covered songs we used to play as O-MooN. We also decided to perform as O-MooN because we wished to give our fans a feeling of nostalgia.

・ Please introduce ANSIFLE to us and also explain your catchphrase “From 0 to 1, going beyond the worldline“.

Because of our strong personalities, ANSIFLE’s live shows are attractive and full of energy. Also our powerful multi-vibe-music is our ultimate weapon, surpassing anything and anybody!

The kanji for “over/cross (越える)” is commonly used; however, we wanted to give a stronger nuance, so we write it as “ (超える)“. This changes the meaning to “to go beyond”. Our intention is to convey → “Going from 0 to 1 to surpass the worldline by going beyond with unlimited power and without any limits”.

When we were talking among the members, we decided to want to keep the “O” from O-MooN, but have it evolve. Then we found the word “Sifr”, which means “zero” in Arabic, so we decided to add that to the band name as well.

Note: In an interview with Vijuttoke, they said this about the meaning of their band name:
Shifuru (Sifr), which means 0 (zero) in Arabic, and un-, which denies it, are not 0 (zero), but become 1 (one)! (un- is supposed to deny the zero, to turn it into one)
Extra note: AN = UN- / SIFLE = Zero

・ What’s the reason for choosing your current instrument?

Vo.Sakatsuki Izumi (酒月いずみ) : I wanted to transfer my words.
Gt.Honoshiro TOTO (仄白トト): I saw a friend playing.
Gt.Yamato TAKERU (大和タケル): My father gave me a guitar.
Ba.Kuroro Uru (黒狼ウル): In the music video of my favourite song, the bassist’s energy was so amazing
Dr.Ouma COMA (逢魔コマ): It felt to be the most fun instrument of all instruments.

・Why did you decide to be a visual kei band and what’s the thing that can only be expressed with visual kei?

We love visual kei and we want to shine like our predecessors.
What can only be expressed by visual kei? Well, it is the ability to “concretely understand” and “to redeem” the weaknesses of someone that they actually wish to erase from their own life.

・ What is the real thrill of standing on the stage?

Gigs are never the same, and each time we can enjoy different facial expressions from our fans, visitors and even ourselves.

We’re inspired by various sources such as movies, news, SNS and our own emotions.

・ What’s the most fun thing about band activities?

We find it fascinating when we produce a song together and have various people listen to it, or when we play a gig and the audience becomes a unit together with us.

・ What’s the most difficult point about band activities?

It’s not always easy to create new things and to look ahead.
Each time we overcome those difficulties with the power of all of us together.

“D” has various meanings such as “Die, DEAD, DEATH”.
Let’s shake off such dark feelings and let’s live for being “ALIVE”. In that sense, we’ve chosen to name the song「D to ALIVE」.

・ What was your biggest inspiration for creating “D to ALIVE”?

The death of an acquaintance. This person died at a young age by taking their own life; we felt so sad that this happened, so we wrote this song to help others with similar feelings. Even if it could only help a little, we would like to create a world where people who wish to die still choose to live.

・ What was the idea behind the MV for “D to ALIVE”?

We created a story to tell people who are going through a hard point in their lives – that we are and will be the ones to save them with our songs. The last scene where the “girl” meets us portrays the message that if you meet/find us, we will be the ones who will help you to make your “future bright” (again).

・ Do you have anything to say about the MV shooting? 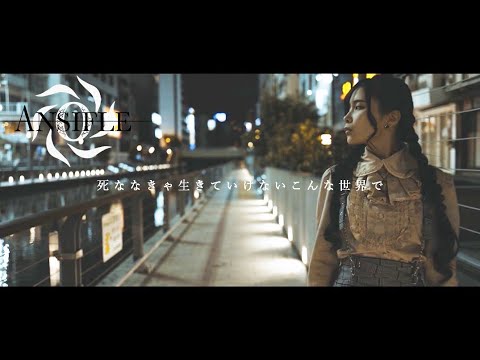 ・ Please tell us why you decided to release a single for 3 consecutive months.

We wanted to start 2022 by announcing some big news, so we decided to announce 3 consecutive month releases. We also wish that our music will be heard and known by as many people as possible.

・ Please explain the story of the lyrics of each song.

＋NEO WORLD
This song expresses our feelings around the reason for creating ANSIFLE.
The lyrics are about how we can make our own stories rather than imitating conventional stories that we know don’t fit us.

HOWLING
This song expresses resonance.
Each of us has a past that we can’t control and choices that we had no choice but to make, but this is a song that says, “Let’s rewrite the not wanting to remember memories“, together, with us.

FOLLOW ME
Not everything in life is filled with happiness, and sometimes we just have to endure things as they are. So from now on, let’s walk together, rather than walking all by yourself. We made it a positive story.

・ Could you tell us more details about how each song was written and composed?

＋NEO WORLD
Honoshiro TOTO (仄白トト): This song was the very first song I made when we decided to form ANSIFLE. I especially like the melody of the chorus, however it took me a long while to create it.

HOWLING
Honoshiro TOTO (仄白トト): At the demo stage of this song, I decided on how I wanted the feeling of the rhythm and tempo. After that, I sent it to the other members to hear their ideas as well. In the end, Takeru gave me some suggestions and I remade the song. His idea was very exciting because it was something I didn’t think of myself.

FOLLOW ME
I wrote this song with the idea of “What is actually essential for our band”?
First, I thought about the melody and that I would call this song FOLLOW ME.
From there, I decided on the chords and the song structure.

FOLLOW ME is a song with a strong message from “us” (the band) to the listener. We’re asking our listeners to follow us.

・ Have you encountered any difficulties while recording the songs?

Vo.Sakatsuki Izumi (酒月いずみ) : I recorded ＋NEO WORLD with a different style of singing than the one I am used to. I tried to sing it with strong and solid vocals that would fit with the “world” of this song. However it was very hard for me because it was a “voice” I wasn’t used to.

FOLLOW ME
We were conscious of giving the voice a softer touch than usual, but we also wanted it to be as strong as the instruments, so we had some trouble making that adjustment.

・ Why do you choose digital releases instead of physical CD releases?

We chose digital distribution because it’s an easy way to listen to our music and it’s also easy for those who live far away to hear our music.

・COVID-19 is still present in the world. What kind of impact has it had/has on ANSIFLE’s activities? Looking back at it, were there any positive happenings as well?

There were a lot of venue restrictions. We have dealt with so many changes, such as restriction on the number of visitors, and the prohibition of the visitors shouting, which made it impossible to call out and get their responses. But, this gave us more time to make wonderful eye-contact with our audience.

— Let’s talk about some other things.

・ Can you speak English or any other foreign languages?

Vo.Sakatsuki Izumi (酒月いずみ) : Ho-Oh, because he seems to move with ease.
Gt.Honoshiro TOTO (仄白トト): Pikachu, because he is the origin and the pinnacle.
Gt.Yamato TAKERU (大和タケル) : Weavile, I love that he looks cute and evil as well.
Ba.Kuroro Uru (黒狼ウル): Mightyena, Lucario, Piplup, Zorua, Luxray, Glaceon, Yveltal, Darkai, Kyogre, Kyurem, etc
Dr.Ouma COMA (逢魔コマ): Garchomp, because I like sharks.

・What are your future goals for ANSIFLE?

It’s to perform a gig in a big venue where we have never played before. We imagine ourselves standing on stage in a large venue and we give our best daily to make this a reality.

・Finally, do you have a final message for your fans and readers?
As we finished our 3-consecutive month releases, we will continue to speed up our activity and we would be happy to be continued to be followed by everyone! Thank you very much for your continued support of ANSIFLE!