Being not blessed with talent and courage to anything, yet they challenge their limits every time and again when they face something difficult. Gradually, they move that immovable wall in front of them. They are doing this to sing with all their power and might to express their feelings to create a beautiful dance which shows their life-burned way of the moments.
Meet EmoPunk&ROCK, “CHERRY” girls unit!

CHERRY GIRLS PROJECT , Thank you very much for this interview.

ーー Please tell us how you entered the group.

We all belonged to the same agency and via an audition we all became members of CHERRY.

ーー What is the meaning and origin of the group’s name?

Originally the group’s name was only “Cherry“, however because it meant that newcomers would enter and being a “trainee” first, “Project” was added to the name. It also means that we aren’t only limited to LIVE activities but also active doing various other activities.

ーー What makes CHERRY GIRLS PROJECT special for you?

We are very particular about our music, we put our heart, soul and energy into each song which is written for us. We’re working straightforwardly, breaking through any wall without any strangeness, and this kind of positive energy we all like from CHERRY.

ーー Why did you want to become an idol? Who or what inspired you?

Each of us has our own reason, but what we all say in common is that we all love to “express” that we are music lovers. Also we really love the idol culture itself.

ーー Three new members have joined the group. What has been the biggest change in the group since you added members?

Of course, it’s a very huge change after three new members joined but we are all genuinely happy that we are a group now who can fight together through everything. The new members have given their very best from the beginning to join the group and they blend in nicely so that it feels as if they were members from the start. Of course the biggest change was the increased power of our shows and the “depth” of our songs.

ーー How do you prepare for your concerts?

When we practice we simulate our concerts, we improve our concentration and learn how we can best express ourselves for each concert. 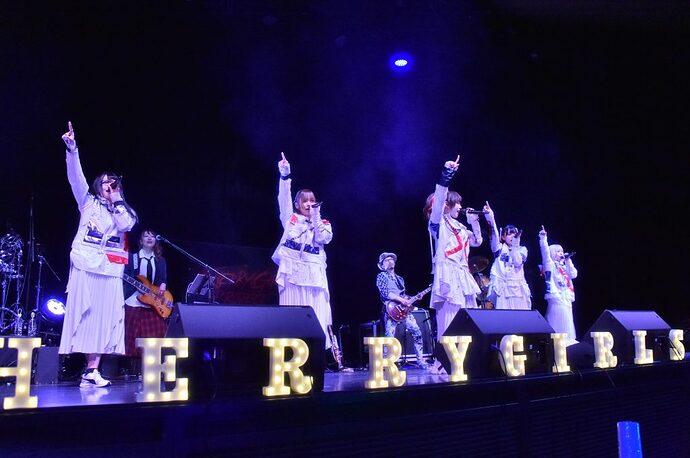 We love all our songs, each song is wonderful on his own, but our representive song is 「僕たちの為に、あの鐘は鳴る。」 We feel that this is a wonderful song that can be sympathized with everyone who listens to our music and gives them energy to keep going.

Also from the song 「僕たちの為に、あの鐘は鳴る。(Bokutachi no tame ni, ano kane wa naru.)」. The line 「後ろに下がらないだけ価値よ (It’s only worth it if you don’t move back.)」 It means that there is “a cross between winning and merit”, so it turns into a very inspiring song because it includes the message that it is wonderful to “step on the spot” even if you can’t take a challenge for various reasons right now.

We also like the line 「全開で全力で最高速で走ってたってさ、願いが叶う保証なんてないんだよね (Even if you’re moving as fast you can, it isn’t a guarantee that a wish will come true)」

After all, all the lyrics of Cherry are really well-written, and we wish everyone to feel them deep into their heart. 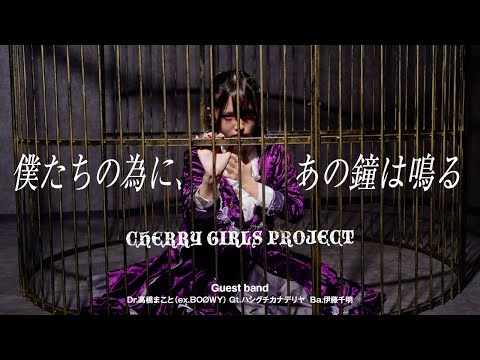 ーー Genjitsu single did hit the 3rd place on the daily chart, 21st in the weekly chart. Also 1st in the indie charts. I’ve read your comments, but you don’t sound very happy? I understand the reason, but isn’t this achievement amazing?

Cherry’s belief is that only the “first” place matters. This time, for the first time we have put all our power in our release events and also our producer was clearly aiming to get first place. So we felt very disappointed that we ranked 3rd place. That’s the reason why it felt that way, but next time we’re gonna hit first!

The lyrics of “Genjitsu” were written by a person who had been stricken with corona and had become seriously ill, to the point where he thought that his life might be in danger. Even in the midst of despair, this person still felt the strength of his life force that said, “I haven’t given up yet”.

We would like to ask those who are suffering from various situations to listen to this song.

“Kimi ni hanataba o” is also a song that was born from the corona epidemic. The song contains the feelings of people from the early days when corona began to spread. The message of the song is that we should take this opportunity to reevaluate the world. 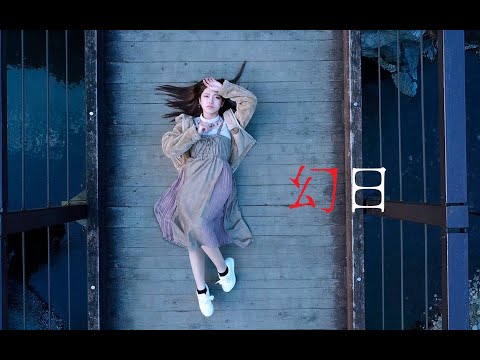 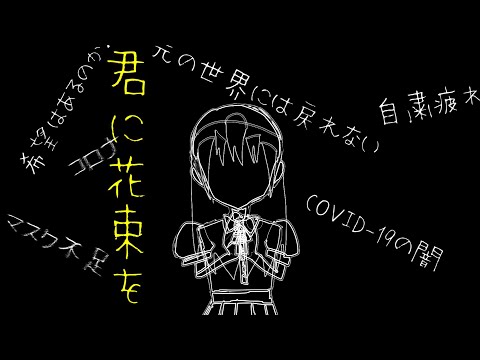 With the fundamental theme of “as long as there is life, there is life,” this is a love story that everyone has within a limited amount of time. It also honestly portrays the innocent emotional turmoil caused by a strong sense of love.

ーー The MV of “LOVE LETTER” has a fun atmosphere, the wild west!. Whose idea was this? And what was your first impression when you read the MV script?

When we were talking with our general producer Mr. K he suggested creating a drama MV with a western location. The director of the MV Toru-ch suggested adding the sound of a “banjo“. From there the idea was passed on to our music producer Hajime Okano who said “That’s an interesting idea!” and it seems that there are more hints and stories are included in the sound.

The MV has no storyboard. The image has been completely directed just by words by Mr. K and Toru-ch. We only received the day’s schedule and we received a note about clothes we need to wear. But there isn’t such a thing as “real material”. When we got the costumes note we all thought “It’s gonna be a western drama?!” and we all felt excited about it when we were “preparing” our costumes.

ーー Please tell us a fun episode of the LOVE LETTER MV shooting day.

Shooting the MV was lot’s of fun, we also had more spare time than last time and most importantly, this time it wasn’t cold! (laugh) Also it was a precious time for us to take pictures and videos together with the new members. Also sitting together next to the bonfire was a wonderful moment. We wished that there also could have been a barbecue… together. 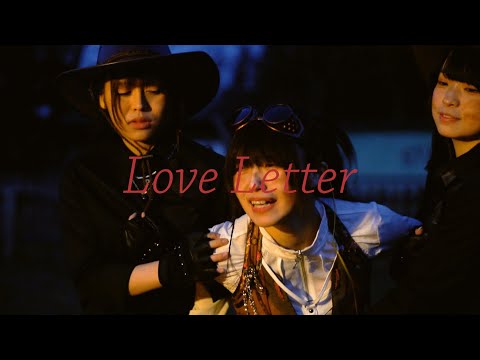 ー What is your favorite drink and snack?

Everyone likes “Koala no March” and “Jagarico”. Everyone of us has their favorite drinks with a sweet taste.

ー What is your favorite animal?

ー What do you like to do in your free time?

Occasionally, when we have a day off, we don’t really know how to spend it. (laugh). Most of us spend it sleeping all day, but also some of us go to places where they can maintain their bodies and polish themselves.

ー What is your favorite manga/anime?

After all, being on stage to give a concert.

We guess it is cold and rainy weather, or just really bad weather (snow, typhoon etc), because it makes our activity more difficult.

ー Do you speak English?

One of our members, Rio Mashio, was born in New York and is a returnee, so she can speak a little.

ー What makes you smile?

The smiles of our fans.

ー I’ve noticed that your producer 籠尾訓一(Mr. K) writes all the lyrics. Does he always decide the song themes? or are you also allowed to give him a “theme” to create the lyrics?

Mr. K writes about any theme he wants to write about. He is also narrowing down a theme to some extent as he did do with the “corona” themed songs. We’re sure if we would request any theme that he would write a song to our wishes.

ー A new album will be released in June this year. Please let us know if you can tell us any stories about making the album.

We don’t know the whole picture yet, but it seems that it will be a two-disc best album set, so it might also mean a “break“. At our last ONE-MAN (March 25th at Alternative Theater) the first chapter of the “new” CHERRY GIRLS PROJECT has been closed, so we assume it also will be linked to that event. 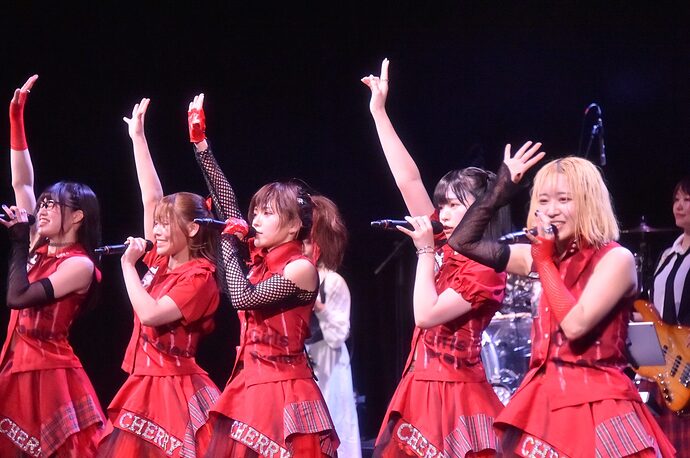 First of all, we were surprised by the idea of “W drums (double drums)” . For the band-set concerts drummer Dainashi (He is also a YouTuber) got fused together with the ultra legend dummer Makoto Takahashi, which feels amazing. Hashiguchi and Ito are also great musicians and we feel that this band-set combination is one of the best in Japan.

ー I’ve read that Makoto Takahashi was invited by Mr. K. But what’s the reason why Mr. K asked Makoto to support the “CHERRY GIRLS PROJECT”?

Mr. K seems to be a fan of Makoto himself, however that couldn’t be the only reason, so we guess he had some real good intentions. We guess he also thought of asking someone who currently isn’t really “active”.

*note; Makoto’s activity is currently mostly only “support and special project”, his band JET SET BOY’s is currently on a break.

ー What about CHERRY GIRLS PROJECT Members. Have you ever listened to BOØWY before? Or did you learn about Makoto’s activities just recently?

Of course his name wasn’t unknown to us because his name is famous. We also knew that BOØWY is a legendary band. So we watched a lot of videos and listened to music when it was decided that he joined us.

ー What about CHERRY GIRLS PROJECT Members. Did you know Dr.Dainashi, Gt.Hashiguchi Kanade and Ba.Chiaki Ito activities or was it a fun new discovery?

We knew about Dainashi because he also uses TikTok. But we didn’t know Hashiguchi and Ito, so we met both without knowing them at all.

ー You played a successful ONE-MAN on March 25th. What’s the best memory of that day?

When we danced “Toki More” together, we felt strongly that our fans felt satisfied and happy that we performed all our songs together with a powerful backing-band. 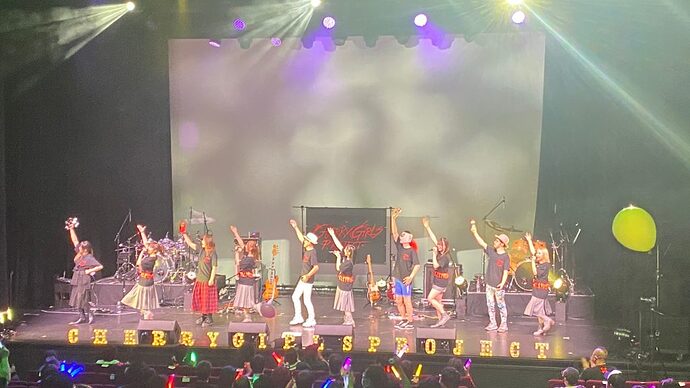 ー Until now what’s the most valuable memorable memory?

There are various great things, but the best things still need to happen, so we guess it’s still too early to choose a highlight!

ー Corona is a global issue at the moment. As an idol, how do you deal with this issue?

As we have declared, “We will not stop!” We are just going to take all possible measures to prevent infection and push ourselves forwards!

ー You are planning to have six to seven members for an audition, what is the reason for this number?

It’s something we also don’t know ourselves, it will be Mr. K’s own decision, however we have been talking for quite some time about how “many” members the group should have.

ー Please tell us your future goals.

We have three major goals set for 2021
①Appearing at large famous rock festivals.
②BREAK DOWN the RANKING WALLS
③CROSS THE BORDER

ー Please give a message to your fans and readers.

CHERRY GIRLS PROJECT has just started to take her path, please continue to run with us! We really wish to go abroad once Corona is under control! Everyone Thank you (for your support)!!