In September 2016 I went to see Nagoya’s Visual Kei band reirei, who are very proud of their city Nagoya and promotes Nagoya the best!. Their live show was very powerful and I think that the band has a lot of hidden potential. reirei’s music can magically entertain and save anyone’s heart. Their power is transmitted not only by watching them, but also via any music source you listen to. A life without reirei? I guess no one can imagine it. This year reirei will celebrate their 14th anniversary, a long run already! Anyway, I’m sure that everyone is looking forward to many more of reirei’s future activities!

reirei proves with their newest EP “Kaiun GOLDRUSH” that they are 100% a “visual” band which you definitely should check out!

They promote Nagoya a lot! So if you visit Japan and if it’s possible to visit Nagoya be sure to check it out!

reirei, thank you very much for this interview!

■Please introduce yourselves. What’s one word you would use to describe yourselves?

■How would you describe yourself with one of your favourite kanji? Why did you choose that Chinese character?

「漢 (Otoko) (man/male)」 Because as a band, we wanna show lots of passionate manly energy.

■Please tell us the reason why you choose your instrument.

Vo. Kurea: Because I purely love singing from the bottom of my heart.
Gt. Kondo Ryoji: Because I admire “hide” of XJAPAN.
Gt. Mero: Because the instrument laying around my home was a guitar.
Ba. Gin: Because there was no bass player.*
Dr. Imina: My uncle played the drums, so I started the drums too, with him as my influencer.

■Why do you call yourself “reirei ➞ Nagoya’s Visual Kei band that promotes Nagoya the best”?

Because Nagoya has so many local idols, mascots, etc, to promote Nagoya. Which gave us the idea that it would be cool to have a local Visual Kei band promoting Nagoya as well, and that’s how it all started.

■Overseas we sadly don’t know much about reirei’s history. So please tell us how you formed.

It has already been 14 years since the “fellows” who wanted to be popular joined a band together and made this dream come true. It’s still unbelievable.

■reirei has been active for almost 14 years, right? What are some milestones from that time?

In 2015, reirei was on a hiatus. Back then, we were debating whether to disband or not. The decision of “To continue as a band” is the milestone of reirei.

■A while ago I heard that reirei was on the point of disbandment. Why did you decide to continue reirei? (I’m glad you guys continued!)

Because of our love for (playing) music and our strong friendship.

■Which song is your favourite to perform? And why so?

■With reirei you promote the city NAGOYA a lot. Why do you love NAGOYA so much?

All members: Because the living atmosphere here feels soooo~ amazing.

On April 14th, you appeared in the show “秘密のケンミンSHOW極”, they asked about which restaurant is the most popular to go eat eel, right? How was the response of people seeing you in the show?

We received various responses via SNS and other sources and we are very happy that we received so many positive responses.

■Which spots in Nagoya would you recommend to a visitor? Are there any good spots for VK fans?

Check out the shopping district “Osu” because of its abundant subculture. It’s a fun place to check out for everyone, not just for V-kei fans! Highly recommended!

■You guys also have seen to promoted the restaurant“栄『創作名古屋めし まかまか本店』” which is near HOLIDAY NEXT HOLIDAY. Why did you decide to tell everyone to visit this restaurant as well?

Because we do promote Nagoya, our focus is not only the music industry but also restaurants etc. Makamaka-san is the owner, we met him through one of our “garbage cleaning” in Osu.

■Recently, the band and its fans have cleaned up garbage from the streets. What motivated this campaign?

After we discussed what we could do to be not only known by vkei fans but also a wider range of people, we came up with this idea. With garbage picking we can contribute to our city, Nagoya and anyone who would like can join us. It has led us to new friendships and bonds with many various people.

■Which is the strong point of reirei which made you unique?

[Die Hard Spirit].
Our spirit and willpower really fit that word. In a nice and wonderful manly way, we want our live shows to feel beautiful and flashy just like our band name “reirei“. When you watch us, you will feel a beautiful, groovy atmosphere and you will see that we play in a style that nobody can copy from us, because we created this style in our 14 years of being active.

■How do you choose the theme (costume, artwork, music video) when you release your music?

Basically, we have two patterns.
・A pattern of deciding on costumes and artwork based on an image associated with the main song of the release to be released.
・A pattern of creating a song after the image of the costume and artwork has been finalized.

〇 Our latest release Kaiun GOLDRUSH has been composed after we solidifying the image etc.

■Please explain each song of your newest release Kaiun GOLDRUSH. 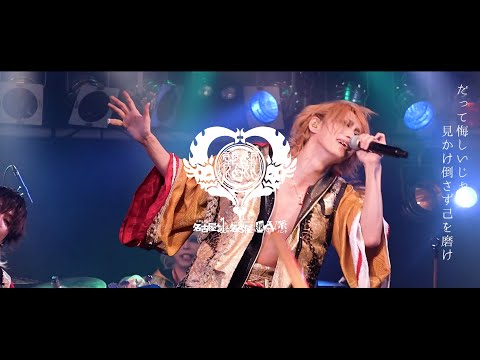 ■Kurea (紅愛), You seem to be good at making Sushi and other Fish dishes, right? Have you studied to become a fish chef? Also, do you work at a restaurant (other than holinekucafe) where people can taste your dishes on a more regular basis? Or is it just a “hobby”?

Kurea: My parents are fishmongers, so from there I learnt a lot about fish by helping them out in their store. The only place I serve fish dishes at the moment is at holinekucafe｣

■To Kondo Ryoji, you often cook, but what is your favorite dish?

■To Gin, You seem to love “Kirby” a lot! What’s your favorite Kirby plush?

Gin: These and many others, it doesn’t fit on just one photo. 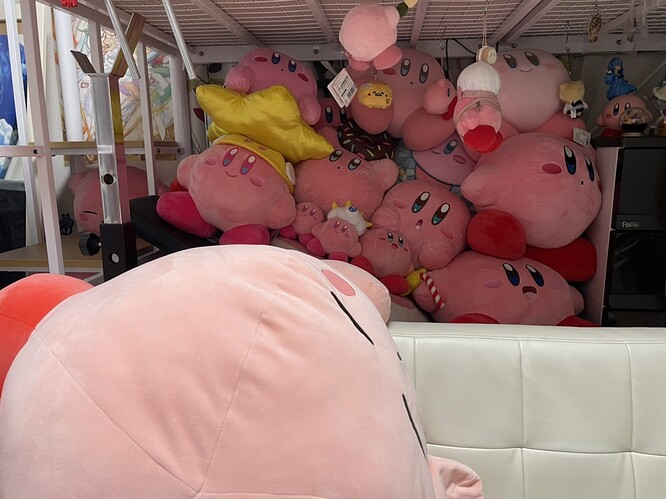 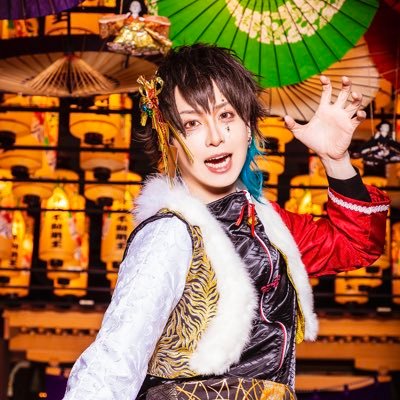 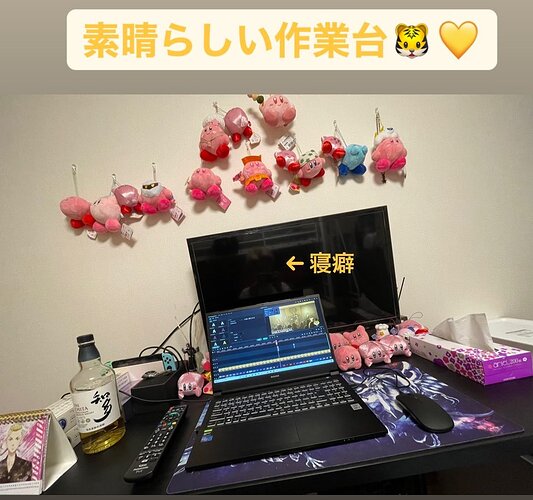 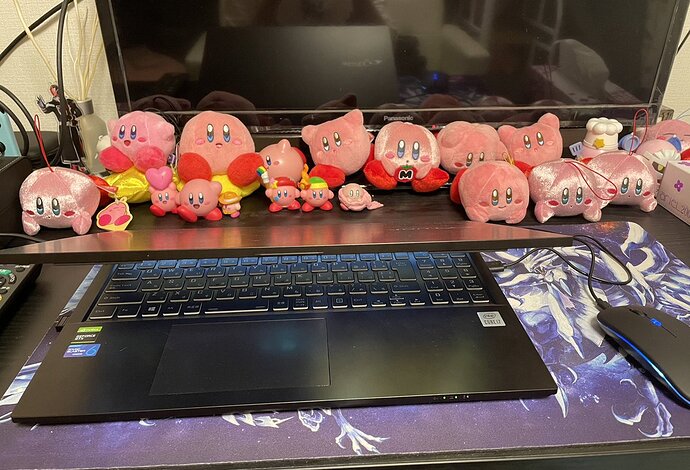 ■To Mero, you joined reirei about a year ago, how does it feel to be part of the band?

Mero: I wish push the success of reirei even much more!

■To Imina: How do you actually decide the designs for your tattoos?

As for my tattoos, I like the anime called NARUTO, so I wonder which I put on my body next, such as Naruto’s nine-tail symbol or Sasuke’s cursed seal. Whenever I feel like it I put on whatever I like.

■What is reirei’s next goal?

[To make Nagoya known to the rest of the world]
Nagoya is the city where you can find the flashy -reirei–!

■Lastly, please give a message to everyone.

Kurea: May our Nagoya-love reach the whole world. We look forward to seeing you at our gigs!

Kondo Ryoji: We believe that our shows can transmit our passion beyond words. Before you even judge the language barrier, we want you to watch reirei on stage. We want you to listen to all our songs. So we’re looking forward to meeting you all!

Mero: We create and play good songs and we’re fun live, so by all means come to watch us!

Gin: I’m aiming to evolve into a super bassist!

Imina: Thank you for reading this interview on JROCK’N’ROLL to the end. If you became curious about reirei, we would be happy if you could check us out via Youtube and/or twitter, whether you live in Japan or overseas. . After all we from reirei are looking forward to meet everyone!