First off the thread is for rumors of any kind, don’t get offended if you read

EDIT: We all knew the tumblr tanukimistress, her tumblr has been deleted by now, so if you have old rumors feel free to add them too.

So let me start by spiling some ridicilous stuff from Kizu.
I dont know where it comes from and even on tanuki they say someone is trolling. But that troll is accusing Lime of having a fart fetish.
What is quite sure he did definitely work as a host.

What is quite sure he did definitely work as a host.

very interesting, so that’s where he built his connections for kizu huh

I could peacefully go on with my life without reading this.

I cannot contribute any rumor of such impact. All I remember atm is stuff like “This dude from this band has STDs”.

accusing Lime of having a fart fetish.

~Lime has a fart fetish and a big dong
~Chamu (Codomo Dragon) has a big umm err Dragon
~Ricky (Jiluka) and Yo-ka (Diaura) are Twins/brothers
~Takuma (Anli-Pollicino/whatever the new band is) gives out STDs like they’re candy
~Kyo (dir en grey) loves the smell of a ladys flower patch (iykwim)
~Ryutaro (plastic trees) likes to be peed on
~Tsuzuku (then Mejibray) and Ryoga (then Born) had mental health issues while being in their old bands that causes them to leave/break up the bands hence why Tsu-chan and Ryoga seemed happier in their new professions.
~Gackt has a beaded um gakuto
~ Shinya from DEG is a realife Angel
~Kenji (Golden Bomber) like em young…like still in high school
~ Dog in the PWO’s Jun Jun is straight but he likes to play gay with Mei for the lulz

gara is an alleged germaphobe and divorcee, that’s the only rumor that matters from fytanuki, god rest her soul :’(

There is actually a thread of some bandomen having actually a kink for that (its just some hundred replies thou, so not a lot)

Also Lime got once accused of being a lolicon from a foreign fan (you can find it in the kizu thread of the mh-back up) And according to what i found, he likes girls that are smaller than him. And then user started to say he gotta date teenagers to find someone smaller than him.

And here we go with host-lime 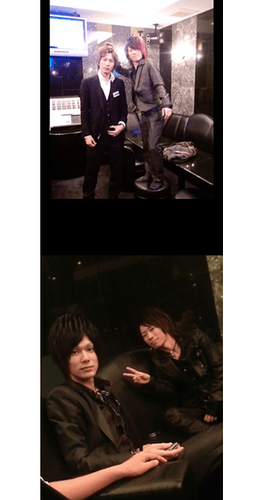 (The photos that went over the link are deleted apparently, so i took the link out)

Tsuzuku (then Mejibray) and Ryoga (then Born) had mental health issues while being in their old bands that causes them to leave/break up the bands hence why Tsu-chan and Ryoga seemed happier in their new professions.

Tsuzuku/ Genki has a Borderline Personality Disorder (in short BPD). He actually talked about it, if i remember that right.
And here i wanted to add something out of my own repertoire, so no tanuki rumor or anything.
Literally just my own bla
Accounting that Genki has a disorder, it might be explainable how or why he seems to turn his back on Koichi. One of the 9 criteria for BPD are unstable realtionships. Partially because People with BPD, think in black and white, you are either a good person or a bad person, there is no inbetween, but people can change inbetween it depending on what they do, or how they deal with the person that has BPD. Now there is a thing people with BPD often do, splitting. Basically people that our brain has categorized as black, bad, we will avoid all contact with them, till we change our mind.
Now you can also guess that behaviour like that will also have a effect on the other person. It must take a toll on a friendship or any other kind of relationship over time.

Also there had been rumors of Tsuzuku/Genki hitting Mia and Meto in the past, which is explainable with his disorder too. (But it doesn’t excuse it, just to make that clear ) Because extreme anger can be another point of BPD

So that Genki talk is literally just from my own experience with the same mental illness. There is a chance that everything is different, but because i know the illness form other people describing it, i just feel like some of the stuff you hear of him can be problems caused by his mental illness

Wasn’t there a rumor that Kyo (DEG) eats children and can’t read kanji?

I’ve already spilled in detail on my Twitter but here’s what I know:
PT rumours: Ryutaro likes to drink pee, is actually bald, mentally ill (the gossipers are never descript, it’s always a term like 心的異常 or 心の病気 but I’d wager they’re implying either depression or simple-type schizophrenia). Akira was in a porno (it’s been named and I personally have searched everywhere for it [FOR SCIENTIFIC PURPOSES OKAY] but I couldn’t find that exact episode he was featured in) back in like '96 and threatened a pregnant woman. Also, Kenken got Hep C from a diseased Bangya lol. Tadashi has no dirt on him for some reason (I expect nothing less from the dignified Suri)

Weird X rumours I’ve heard include that Yoshiki was successfully sued for like 100 000 because they share a name with X (from America) and that Yoshiki ordered the Yakuza to assassinate Taiji.

All MM fans have heard the rumour that Gackt killed Kami. It’s like a rite of passage

well Gackts solo career did take off after Kami died… I think.
also: X (American band) - Wikipedia came before X Japan so yeah they would have won the case.

Ryutaro (plastic trees) likes to be peed on

I heard he likes to smell people’s scalp, this pee fetish rumour is new

It feels to me like some of the weirdest rumors are kind of a revenge because quality time with bandman wasn’t of the best quality. xD

please no kinkshaming our faves onegai~

Oh, yeah i came across that too

Kyonosukes rumor seems so typical, like “he is so nice and cute on stage, so he gotta be a asshole offstage” . That kind of logic

You can find still a tumblr that translated the rumors that was on tanukimistress into spanish. That tumblr is still online https://fuckyeahtanukiespanol.tumblr.com

Kyonosuke is violent and collects girls

Kyonosuke used to be the roadie of Mejibray/Meto, that’s why they spent/spend a lot of time together!

Hhh you just reminded me of the “legendary Chamu pic” from Twitter. I finally had forgotten his bare ass crack… I still regret clicking on that link lmaooo

Also didn’t Teru from Versailles/Jupiter have a “big dragon” too? I thought that was said on that Fuckyeahtanuki Tumblr too

I’m not too sure about this one, but some gya’s say that Subaru from Royz likes getting his “peach” eaten

I don’t remember anything about kiryu other than the takemasa getting married.

In baby kingdom shogo seems to be the one who dates banyas . nothing scandalous about him.

Dog in the pwo mizuki has a big dog lol