I figured I would post this since I never posted a review on Monochrome Heaven.

It sounds like a typical GazettE intro. I heard that it’s supposed to incorporate all the previous intros but I was only able to catch the intro from DOGMA. Not bad but nothing special either.

The GazettE seem to be pretty good at making title tracks, and this one is no exception. The tune is catchy and there are some nice breakdowns. Some melodic parts and some heavy parts with a nice balance.

This song sounded like a track from DOGMA, and not in a good way. It felt like it was trying to balance clean vocals with harsh vocals without really succeeding at either. For a song with the title of the album, I was expecting more.

This track felt very energetic to me. It sounds like something that would be easy to sing along to, with a memorable tune. Around the two-minute mark there’s a back and forth between the guitars that I enjoyed. The opening sounds like it will be a heavy song but surprisingly it’s not. Feels like Ruki had a lot of fun with this one.

A melodic track where you can really feel Ruki’s emotion behind the singing. There’s a nice contrast between Ruki’s clean vocals and the heavy guitars. The breakdown in the second half was enjoyable. Not a bad song!

This song comes close to being a ballad but is probably a bit too heavy to be called that. Even so, it makes for a contrast with the heaviness of the previous tracks. I really liked the intro. The third verse was the best part of the song for me. Ruki’s voice is beautiful. The ending of the song was kind of surprising with how heavy it is.

It’s been a long time since the GazettE have released an album where the best song has been a ballad for me (probably not since STACKED RUBBISH with 千鶴) but this track did it for me. I liked the juxtaposition of this track after a ballad-like track since it’s pretty different from the other tracks in the album. It felt like Ruki really gave this track his all and the solo near the end is amazing.

This song reminded me of Devouring One Another. It has an unsettling character throughout, in a good way. Some parts of it sound like Ruki is uttering a curse. It’s a nice heavy song that stands out on this album, and I’d say it’s one of the best tracks.

If you thought titles in Japanese meant ballads, this song proves you wrong. It returns to the heaviness of the early tracks. Unfortunately, it’s rather forgettable. There’s some nice screams from Ruki but other than that it didn’t really leave any impression on me.

Two Of A Kind

Another song that didn’t really do anything for me. Fast-paced song with some clean vocals and some growling, but the tune isn’t really memorable. The breakdown halfway through is kind of interesting but that’s about it.

The opening reminded me of Hyena, with what sounded like clapping. Very cool. The heaviness at the beginning was very enjoyable. I thought it was going to be the next Headache Man or Maggots, but unfortunately the fourth verse ruins it. I wish this song had kept its heaviness throughout. Don’t get me wrong, it’s still a pleasure to listen to, but I can’t help but think about how much better it could have been.

This is probably the most upbeat song on this album. It reminded me of Best Friends with ending the album on a high note, but not as good. There’s a nice solo but it just isn’t that memorable of a track. Still, it’s nice to see the GazettE doing an upbeat song to add more variety to the album.

When I first got this album, I didn’t really have high expectations for it. I just wanted to hear some new GazettE music given that DOGMA was released three years ago. I ended up listening to NINTH once every day for a few months, which I’ve never done for any other album. Compared to DOGMA, there’s more variety in the songs on this album, which is a plus for me. It makes for some easy listening and several of the tunes are pretty catchy. I think the best songs on this album are all in the middle (虚蜩, その声は脆く, and Babylon’s Taboo). Overall it scratched my GazettE itch but there’s no tracks that blew me away. I would rate it 7/10.

^ This is my review of NINTH.

NINTH ODD SMELL grew a lot on me after repeated plays.

The only song I didn’t like was ABHOR GOD.

Is there any difference in the ‘ninth mix’ of Falling and the pv version?

Abhor God is under appreciated. Ruki’s performance in the chorus has the slightest nod to his PS Company days that, at least for me, brings back a bit of their quirky punk-y indie roots. Honestly never thought I’d hear this side of them especially with the direction they’ve been going since Dogma.

If Dim is a 5/5, Ninth is a 2.5/5, or maybe a hard 3.
Seems like Dogma was a one-off where they actually wanted to try and add something new into the gazettecore sound. By comparison, Ninth sounds like a collection of B sides thrown together to make something coherent.

I love the whole album from start to finish. Got a greater appreciation for it after hearing it live. I think it works very well live. I haven’t listened to it in full recently, preferring cuts like Unfinished, Falling, and その声は脆く. I think it’s a very consistent album that goes for one sound and nails it, as opposed to their early days which saw them experimenting all over the place. I generally think they pump out great albums that focus on one theme (DOGMA is another example) that sound a bit same-y if they go on too long. I know the user above me said that it sounds like a bunch of B-sides, but some of the GazettE’s best songs are B-sides (Crucify Sorrow, Headache Man, 千鶴, 奈落, GODDESS all come to mind) so I don’t think that it’s necessarily a bad thing. NINTH lacks a killer track if その声は脆く isn’t your jam. Overall, I would rate the album a solid 7 out of 10, maybe 8 out of 10.

Isn’t Headache Man on the album? Technically, Distress and Coma is a double A-side single… right?

HEADACHE MAN is on the album (and so is 千鶴), but I’ve never heard those singles described as double A-sides. They could be, but I don’t remember either track getting much attention until they were placed on the album. Rather, I always thought that they were B-sides promoted to the album. Machiavellism can be in the same boat, as well as half of Kisou IIRC.

my-image(1)936×279 55.2 KB
My general opinion about Gazetto goes like this.
I really like Ninth, most of the songs are really cool, especially during the second half but I don’t think they transcend like other songs they have. But definitely an improvement over Dogma.
My top 3 Ninth songs is:
-TWO OF A KIND
-BABYLON’S TABOO
-Sono koe wa moroku
4 Likes
funeralinthevoid February 19, 2021, 11:38am #11

Tiermaker is new to me, but I love the idea. Here’s my ranking– 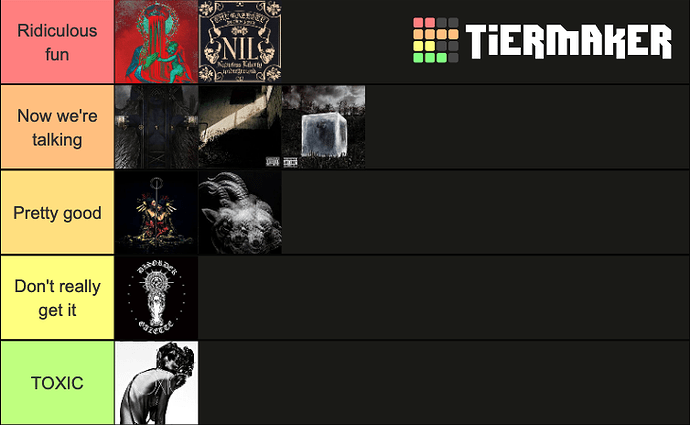 Interesting…what about TOXIC don’t you like and what about DIVISION do you like? I find that interesting because they were both two sides of the same coin to me. DIVISION was like a continuation of TOXIC to me.

I’m not big on the electronic-style tracks. I know DIVISION has these too, but the first side of the album is more my taste and very good (with tracks like Kagefumi)

In all honesty, I haven’t given TOXIC nearly the amount of plays as all other albums, simply because I find it irritating and not very memorable. Maybe I’ll go on a binge sometime and really try to like it, haha. It worked for me with DOGMA.