Offensive melodies and lyrics in Visual Kei and Japanese music

We already have talked about offensive band appearances.
But what about the melodies and lyrics of the actually music?
Have ever felt something offensive to you? Melody wise or maybe even lyrical wise?

Actually @Rena noticed me on this track from HONMONO
It uses the Allahu Akbar, which well can be offensive…? Those who are Muslims, how do you feel about it, if a band would use it as their SE… is it okay or is it an absolute NO GO?? Of course please explain? 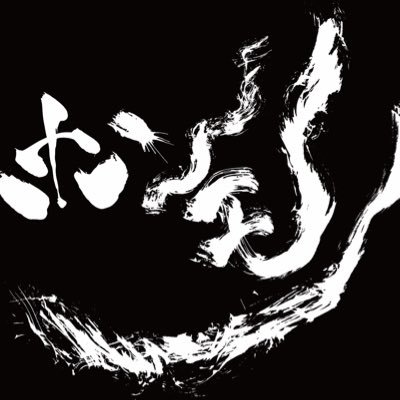 Another example is still

ANTI-FLAG from Calmando Qual “HEIL HEIL”
The lyrics themselves are kind of “harmless, has not really something to do with WW2” But playing this song while my parents are around… I still don’t do it.

its not about cosplaying or looks but the melody of the song or lyrics.

How is a melody offensive?
Anyhow, my commentary on the offensive aesthetics transfers over to the lyrics. The lyrics aren’t particularly sensitive, but the music video pushes it over the top. My apologies if this wasn’t the content you were looking for lol

Well… some melodies can be culturewise and if used in a wrong way or intentions it might can feel odd or so.

I guess this topic is looking at actual sensitive topics but there are melodies and lyrics that are offensive to ears that I would rather not recall.

I don’t see how “praise god” can be offensive but I have heard about muslim songs of prayer being sampled as a no-no.

The only offensive lyric I can think of had to do with a kpop song that had a Japanese word in it. I don’t think the word was even offensive.

Not a big fan of using my religion’s imagery as a base for cool design without any related meaning or intention, as I don’t think the Gazette is about to spread the Catholic faith in Japan any time soon. 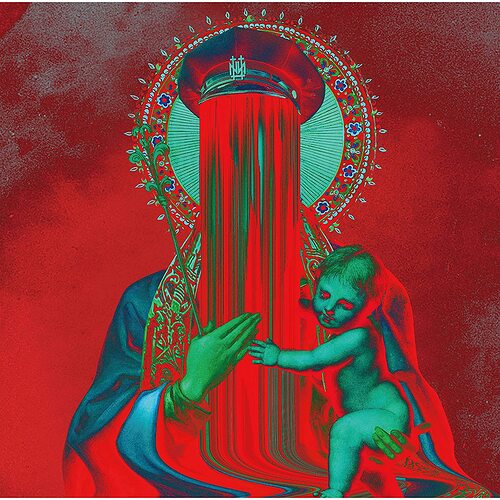 It uses the Allahu Akbar, which well can be offensive…? Those who are Muslims, how do you feel about it, if a band would use it as their SE… is it okay or is it an absolute NO GO?? Of course please explain?

Its not about the mere “Allahu Akbar”. Its about the fact that they used the whole Adhan, the islamic prayer call in their SE.
The important and difficult part here are the words
I wrote last night something about our discord about it.
Besides the fact that the Adhan is the prayer call, which calls a Muslim to pray and whorship Allah. Using it outside of that purpose is accounted as offensive, because its disorts its actual purpose.

Another thing is what is part of the Adhan.

The shahada is an important part in Islam.
If you can you will say it when you die, you say it during each prayer and it’s also the one thing you say if you convert and become a Muslim
We also whisper the shahada into a newborn’s ears
So with a that you might understand why most Muslims will see it as offensive to use the adhan that has the shahada in it for merely for music

I am not the best Muslim, i dont pray most of the time, i will probably go to hell for the music i listen to.
But there is one thing i am sure of, every muslim will account it as offensive, if a band uses the prayer call in the way Honmono are doing it.

If they liked the melody, take it… change the words, and no one will cry about it.

Seeing that topic I almost immediately thought about BUCK-TICK and their controversy after the release of “Six/Nine” back in 1995. Both the album and single versions of “Rakuen” had an excerpt from Quran (at about 2:30 into the track) and once people took notice they were pulled from the shelves, so they had to reissue both releases to remove that specific part 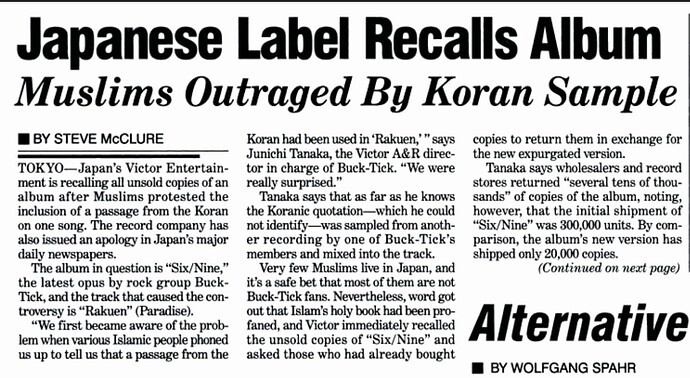 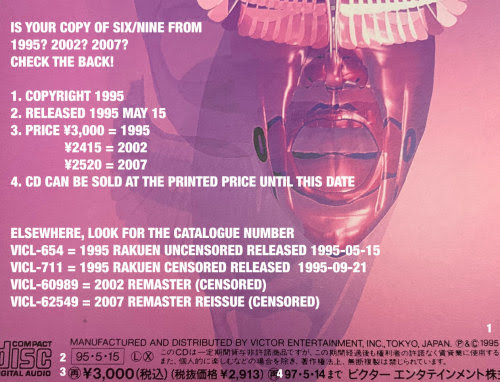 You should understand that japanese use all this because of inspiration, not because they want to be disrespectful to someone…

Sure, but not everyone can see things that way, and the reason Why something might be not liked by a group of people is what we also should try to understand.

Well, they are artists, and if some people don’t understand that this is artist’s view - so, しょうがない。。

artist views can be also offensive or totally stupid. And even if you are an artist doesn’t mean you can say and do everything without any pardon.

anyway back to topic.

Maybe I can offer something interesting because it’s relevant trivia for this topic!

Dir en grey’s first release was a demo tape called 業 / 蒼い月. It was recorded for promotional purposes and not listed for sale. 蒼い月 was featured again on MISSA with reworked lyrics. 業 was included on the PV compilation 「楓」～if trans･･･～ but wasn’t on an official album until THE UNRAVELING in 2013, at which point it was reworked almost entirely.

So what gives? 業 was supposed to be on MISSA, but the band decided to exclude it at the last minute due to the lyrics. Not only is the song lyrically extreme, it uses a bad word, namely kikeiji (奇形児). This translates roughly to deformed child, and has connotations to children born of defects due to nuclear fallout. It’s a word that is censored in the press, from what I’ve read. Here’s a rough translation of the lyrics:

While we’re on this topic, 惨劇の夜 is much of the same story. The lyrics are so extreme that Kyo was pressured to change it at the last minute. 惨劇の夜 was supposed to open MISSA, but instead we got 霧と繭. 惨劇の夜 is usually what they played live. Here are the lyrics.

And then finally there’s embryo, a song with lyrics so extreme that the band only released the graphic ones on the album. The single version was only performed live once.

Is that offensive enough for y’all?

Wow. That truly is extreme.

kikeiji (奇形児) is also used in Mazohyst of Decadence, although it was censored when it was released on Gauze. Kyo does sing the uncensored word in their 1999 Osaka Jo Hall show.

I can check in a few hours.