Ai beefing with Kane to Juusei?

Has anyone else seen the stuff going on with Ai from Gulu Gulu and Kane to Juusei?
I haven’t seen it myself, but I heard a few days ago he made a post about Kane to Juusei saying he’d block anyone that had a Kane to Juusei profile picture because they “stole the gulu gulu concept”?

It’s a speculation some people are making from this instagram story he posted a few days ago.

“To our overseas followers
It’s rude to follow me with my plagiarize artist as an icon, so I’m blocking you”

It’s rude to follow me with my plagiarize artist

It’s really funny and hypocritical when you consider that Gulu’s entire schtick was ripped off Eroguro aesthetics that are nearly a century old. (They should pay royalties to Edogawa Ranpo, oh wait he’s dead so it’s fair game, huh?)

The drama reminds me of DA “artists” who angrily sent their army of friends after other people for copying their oh-so unique “STYLE”, except it was 100% copied from Tim Burton or whatever edgy shit peeps were into in 2k.

What is kaneto copying from Gulu Gulu because i listen to both and i see no similarities, im confused.

gulux2 could learn from Kane’s work ethic and output.

ummm what? i love both bands and really don’t get it. ai needs to chill the fuck out and work on his ego lmao. this is embarrassing.

Ai should make some music instead of posting cringe on main

Literally, it’s been a whole lotta… Posting and not a whole lot of releasing anything lmao like the gap between the last release and chuuzuri shoujo and then you release only one thing this year. Put out some music lmao

ai thinks he’s the first guy to ever put a microphone entirely into in his mouth and growl “im a sex pessssstttt!!!” into it

idk if this is related, but what kind of grown ass man brags about how many people he’s blocked? what a little bitch

I would expect to see this kind of mess on Twitter. 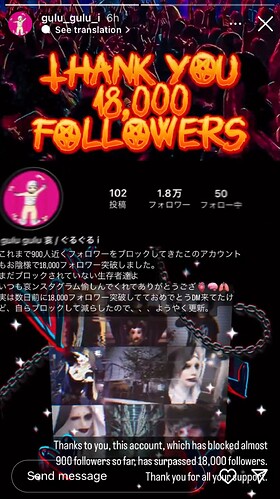 I really liked Ai’s work in Kuroyuri To Kage and I definitely didn’t expect this. It’s kind of a letdown, but it’s hilarious nonetheless .

LMAO I SAW THAT TOO
I don’t wanna pick sides or make it seem like I don’t like Ai but it’s a little weird.

The secondhand embarrassment I feel for this man is reaching a new high. Jesus christ dude this is a grown man. So eDgY

Is it a flex to be blocked by Ai right now, or is it normal? xD