Another week, another “how insensitive can a vk band be when it comes to racism/fascist symbols”?

That’s how their promo pic looks like. So you can see it’s intended to be very political. The outfits the “loud voice strike” situation etc: 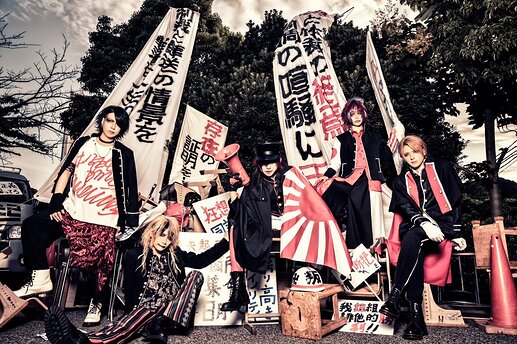 So is their video. It’s basically a standard performance video with scenes from demonstrations (police with helmets, teargas,…):

Their merch choice for promoting this single was kinda interesting, especially considering this whole political theme:

A megaphone shaped light showing the imperial Japanese rising sun flag which is mainly, but not exclusively, used by Japanese fascists/Neo Nazis/right wing parties today next to a “sun symbol”/Manji.
Considering the whole political theme (strike, Haro’s uniform/soldier/whatever looking outfit, the name of the single, the megaphone,…), it’s obvious to make a connection between the “sun symbol” and the rising sun flag.
I assume they wanted to be edgy, but didn’t dare to use the “real” swastika (which is basically the mirrored sun symbol).

OF COURSE this caused an uproar (which was probably intended, but not like this lol)
They now posted a statement where they basically say they read the “opinions” and explained the design.
The rising sun flag stands for “wishing for happiness”, the manji (which they themselves call swastika too) is just a religious symbol and characters don’t hurt someone.
They only deleted the tweet because of the “confusion”, but still gonna sell the merchandise apparently (hello MERRY-senpai!) 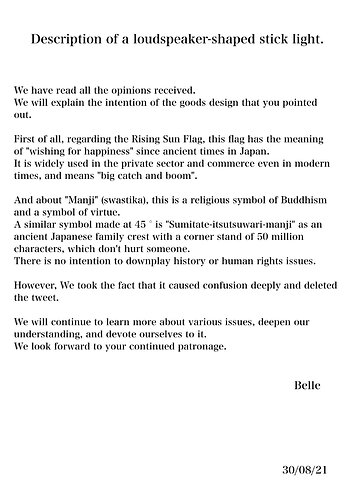 They said they’re still gonna learn about…“various issues”??? not telling us what they’re even talking about. The parallels to MERRY’s blackfacing issue are obvious: VK band does something stupid/provoking, Non-Japanese fans tell them that they consider this, VK band posts statement explaining their “art” and telling they’re all wrong and continuing selling/using this stuff but only when Japanese can see it because they don’t care.

Sooo, what does everyone think about this?
Do you think combining the imperial flag with a manji/swastika was just a coincidence they didn’t think about?

Again, just like with Merry, to me it’s just some random flavor-of-the-moment prop or gimmick for their current single / tour theme, which they will then forget and exchange for something else when the next release / tour cycle comes along.

If anything, it’s bringing more attention to the band so I guess they succeeded? lol.

(btw I think this whole look + video came out waay before Merry’s, tho there is kind of a parallel)

I personally dont care if someone wears a nazi uniform or an imperial one in vk, I find them stylish and they rarely are an expression of extremist views. But with this band it feels like theres more to it than just shock value.

I’m pretty sure it is. But it still shows how little aware VK bands (and Japanese society) are of these issues and don’t see any problem with using these symbols for fun.

(btw I think this whole look + video came out waay before Merry’s, tho there is kind of a parallel)

I didn’t mean that they’re “imitating” them, but their way of reacting was pretty similar

they rarely are an expression of extremist views

Right, they usually express a lack of knowledge of history. As a German personally I care a lot about someone wearing an SS uniform for fun. I bet nobody of them has ever been to a concentration camp memorial site and it shows. For them this is part of pop culture like a Superman or Batman costume, but for most people it’s a symbol for the atrocities of the Nazi regime. Especially considering Japan was an ally of Germany in WW2.

To me this question is not about “Am I allowed to do this?”, but “Should I really do this and what’s the benefit if I do this?”. It’s about decency and the categorical imperative.

That is one damned expensive light, tried and didn’t not like the song or video, too much chaos. The throwback to the Anpo protests and the rise of the Zengakuren in the 60s is cool, but the look and symbolism is about twenty years too late for that. Also, from what I’ve found and my cursory knowledge of world war 2 Japanese history, student demonstrations weren’t a thing. It appears that everyone was pretty Gung ho until Hirohito got them into something they had no chance of winning and the nail in the coffin with Hiroshima and Nagasaki

Honestly Iwo Jima should have been the writing on the wall.

Give it up already and focus on important issues that actually matter, like Afghanistan for instance.

First of all swastika isn’t the same as Manji 卍

A real swastika is the mirror of Manji 卍 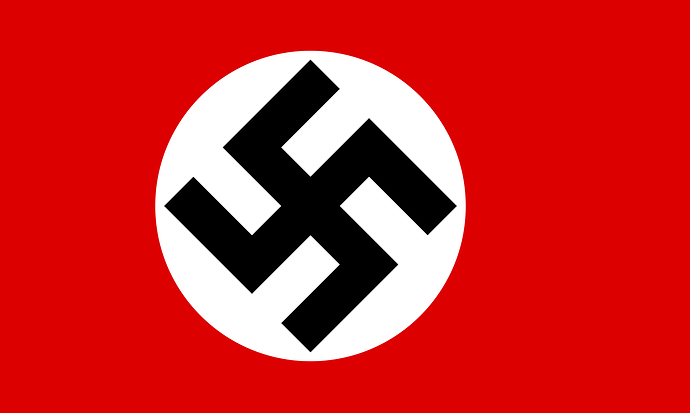 And I’ve checked the Manji 卍 on the microphone and it’s not the swastika, which means it’s fine to use.

Manji 卍 Buddhist symbol which already existed long long before the WW2 happened. the Nazi’s mirrored it and used it as their 3rd Reich symbol.

If Belle would use the symbol as the Nazi’s did (So the mirrored version), then they were wrong.
They didn’t, it’s really 卍 . And it would be stupid if we need to cancel a Kanji only because it looks like the Nazi symbol…

On this week’s episode of “V-kei Fan Mental Gymnastics: Apologists”

THE SONG IS SUPPOSED TO BE POLITICAL. IT IS CALLED “LOUD VOICE STRIKE”. THE LIGHT STICK IS A MEGAPHONE FOR SHOUTING INTO, LIKE IN PROTESTS.

Are they protesting for “wishing for happiness” or “big catch and boom”???

Are they striking against Buddhist temples or Japanese families using the manji as their komon??? Hello??

This COULD have been a crafty parody of extreme nationalist groups protesting the Korean team’s banner during the Olympics! Or even the general anti-Olympic protests! What an interesting commentary that could have been!

But NO! That’s what REAL, conscientious artists would have done, ones that had put thought into their motifs and imagery and have a message they want to spread! THAT is how you use imagery with a controversial history!

NOT LIKE THIS! Not by backpedaling with the flimsiest of excuses.

Punk is gonna claw out of its goddamn grave at this rate.

Just gonna throw this thought out there, but maybe most modern visual kei bandomen don’t actually have any deep meaning to their looks/merch. I get the feeling that they only think about whether something fits the theme and looks cool, so personally I don’t understand any 'true artist’s comments in regards to modern day vkei. They’ll most likely be over this political aesthetic on their next single anyway.

As shitty as it is to say - cultural differences also exist and I have to wonder whether most people in Japan would even care if this saw this megaphone. The trend seems to be a band doing something to offend the west, getting called about by western fans and apologizing for it, then continuing on with the offensive thing in Japan. So can they get away with it because of hardcore bangya or because the Japanese just really don’t care lol

Complaining about the antics of a shitty band that produces mediocre crap both musically and visually is just as cringe as their attempt at being edgy. You are not their target audience and will never be. Your measly 3000 yen for an album is nothing compared to the hundreds of thousands of JPY they are going to make from their core Japanese audience by selling all their edgy merch.
Their target audience is mostly if not completely ignorant to what the west sees as controversial and frankly why would they give a shit? What difference does it make if some no name band that has such a limited reach decides to go fully Empire of the Rising Sun for their next look? Do you think people in Korea or China give a shit?

i don’t necessarily disagree with your main point, but as someone from hk, i wouldn’t be so sure about claiming that chinese or korean people wouldn’t give a shit… because we definitely very much do, no matter how irrelevant the band is.

Really don’t see the issue, they’re obviously not trying to harm people, there are so many serious problems in the world nobody seems to give a shit about it’s kind of ridiculous to prioritize something like this, is it not?

It’s the epitome of virtue signaling and part of why Twitter is so toxic. I highly doubt these types would literally attend a show and either protest or try to basically reprimand the band after the show, it’s all talk and all bullshit.

I’m fine with people getting offended and pointing out why they feel that way, but I also believe in choosing your battles. We’ve already seen how this goes enough to know that a band is just gonna give some half assed twitter apology and hide the questionable from all western promotion - all the while continuing on in Japan with the bulk of their audience like nothing happened.

If people are gonna be offensive or ignorant, (or whatever word you wanna use) I’d prefer them not to hide it from me and I see what everyone else sees too. Then I can form my own moral judgement with the whole picture

Exactly if people believe some dumb shit I’d prefer to know about it so I can keep my distance rather than them keeping it inside making it seem like they’re cool only to find out how they have some crazy/ignorant beliefs. Censorship actually worsens the problem because people like that often think if someone’s trying to censor them it’s validation.

Obviously they were using the swastika tilted and it was done along with imperial Japan motif so saying it was Manji is just uhh. Own it, dont lie.

Showed the merch pic to my staff girl who worked with bands like Raphael and such, without explanation she said “thats not ok/それはダメでしょ?”
Other band senpai also said “what do they want to do?” So saying all Japanese are ok/do not understand historical context/bad taste is a falsehood.

I believe in freedom of expression, so I defend anyone’s right to do this but I also defend anyone’s right to judge it as bad taste.
Saw some people saying “if you cant accept that this is in vk maybe you should leave the subculture.”
Thats like saying in Punk, a genre also full of shock stuff, if you dont like Nazi punk bands you should leave punk.
Although ベル is more a pop rock kira kira band than it is a purely vk subculture band (which honestly makes it more bizarre they chose this motif) if you view their decision in bad taste you share the views of others rooted in the scene here so dont let some apologist say you are wrong for feeling that way, but on the other hand if you feel its wrong meh just dont support those crap bands.

If a band did it in an artistic way like Suehiro Maruo’s representations in his mangas that post war Japan’s hellish landscape was created due to the greed and ambition of war yah I can see that as cool. But just feeding into countryside mindset of Japan is number one sentiments and that era of dominance’s aesthetic is cool? Naw. Just reminds me of folks in the America’s south with Confederate flags.
After living here so long it looks like a country singer in an American flag suit too tbh

I don’t know shit about Belle, but yall sure are sleeping on all of angura kei bands that have been using this rising sun symbol as their aesthetic for YEARS