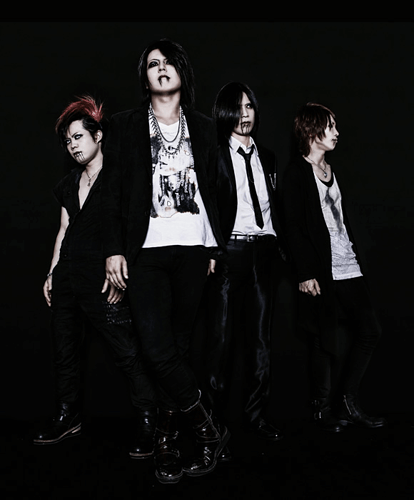 Just a few thoughts on this band. When I first got into VK as a kid I seriously underlooked these guys.

I knew Hazuki as he was in Lynch at the time and back in those days was one of the biggest voices in VK. I always considered him to be the real ‘voice’ behind Deathgaze, with each of his predecessors practically mimicking his singing. Hazuki left after the release of 294036224052 which imo sounds like a blend between alternative metal and vk with some nu metal influences and I wouldn’t be surprised if early Deathgaze was inspired by bands like Slipknot and Korn because there are strong similarities in some songs.

But I can’t tell which vocalist I like most and that’s something that really intrigues me, even if Sou and Ai are basically Hazuki clones.

Sou joined in October 2004, 6 months after Hazuki left. He was formerly the vocalist of Be≒Luna, an underground nagoya band with many influences. To me they kinda sound like a poor man’s mucc but darker and more experimental, with some noticeable nu metal influences as well. I’m not impressed by Sou’s cleans in this band. At times he almost sounds like a drunk Tatsuro, but I am impressed by his heavy vocals as there were some legitimate grunts and growls that sounded damn impressive. However in Deathgaze it’s easy to see that his singing improved A LOT even if that lower register is less natural for him. Chaos and Downer are both great records. He managed to nail ballads like Sinner that there’s no way he could have performed so well back in 2003.

As for Ai, the fact that he went from Deathgaze’s bassist to a really really good Hazuki copycat so suddenly was very impressive. He had never been a vocalist in a band before, but here he was singing and screaming like his predecessors. In my opinion, Ai is a very dynamic singer. He has great control especially over his clean vocals as shown in songs like Abyss. His voice sounds very full and resonant perfect for poppy chorus songs that have powerful melodies. When it comes to singing dynamics Ai easily wins but it’s not a fair competition being that he was with the band much much longer than Hazuki and much longer than Sou.

But like they’re all great so I can’t figure out who I like best. I think Hazuki is good at being… the original vocalist who started it all. Sou and Ai are both for the most part different brands of the same candy. They all definitely have very different voices if you pay any real attention, but it’s clear they’re all trying to sound similar to Hazuki, especially when it came to screams.

I could be really off base but I think that Sou was likely the most dynamic and versatile of the three as he completely changed his style from his previous band to perform Hazuki-like vocals, he completely abandoned his old way of screaming and singing for this. As for Ai, he delivers excellent clean vocals from the very beginning, and as he gained more experience as a singer he only continued to improve. I do not have a favorite at all but would probably say Ai pretty much carried this band as they’ve been making music with him on vocals for much longer than with both Hazuki and Sou combined (Hazuki + Sou combined would only be 3 years).

Who do you guys like the most between the 3 vocalists? Or who would be the ultimate vocalist if we were to go a step further and compare late stage Ai from Deathgaze to late Lynch Hazuki??

I have a fondness for even early Hazuki’s voice, but my favourite album is genocide and mass murder, so I’ll have to go with Sou. Ai is also really good, though! It’s uncanny that they all sound similar enough to each other. Sou and Ai seem to sound similar enough people sometimes think Deathgaze only had 2 vocalists lol

Hmm I don’t find them sounding anything like Mucc or Sou sounding like Tatsurou though, but I’ve never made a direct comparison. I think people who like early Mucc would like early Deathgaze though for sure.

I ended up not liking Deathgaze’s later releases, but the first few were really solid imo. Hazuki probably wants to forget them though since he seems to hate even lynch’s first album

I think Hazuki’s vocals matured an insane amount since then though, so did Ai’s but between the two right now, Hazuki wins (for me).

And if you like Ai/Deathgaze please check out DARRELL. i don’t really see them mentioned much

but it’s clear they’re all trying to sound similar to Hazuki, especially when it came to screams.

Sou did have his signature scream back in Be≒Luna, and Ai started using a very awful filter when he first took the vocal parts on their singles insult kiss me/I’m broken baby/DEAREST because he couldn’t hold the screaming thing. But I must agree on one thing : back to BOTTOM LINE recorded show, it’s really really hard to tell without knowing if it’s Hazuki or Sou on vox as they sound the same.

About their clear voice, well, sure Sou sounds close to Hazuki, but that’s why he joined the band I think. That lower register less naturel you call is kinda common in VK, often before vocalists take singing lessons and improve their skills. I always thought (and still think) that Ai is a very limited vocalist, his tone makes the whole thing boring except for some songs. He became interesting to me with DARRELL’s retook of DEATHGAZE songs on BRILLANT DEATH but hey, he started being NOT a vocalist and embraced the part as far that he could, becoming a pretty good vocalist nowadays.

Back in deathgaze/Deathgaze/DEATHGAZE, yeah, for sure. He perhaps was the most grown vocalist, but Hazuki never had the chance to make a proof with more than one release. In fact, when lynch. released Greedy Dead Souls & underneath the skin, he was that close to be as good as Sou was. And it was released months before genocide and mass murder .

Ai pretty much carried this band

Agreed. I’m still bitter that Sou left the band for a girl

Oh, and, yeah, Sou was my fav. Hazuki next, Ai in last.
Hazuki late stage > Ai late stage technically speaking, but they’re as boring as each other

For me it’s definitely Sou.
With him they had the best era release wise - genocide is their Opus Magnus imo.
As the three vocalists really sound very similar it is not that easy to stop major differences.
But I always find Sou has the most emotional side in his voice, which is most hearable in their ballads.

For example Miscarriage. The Genocide version feels deeper for me then the Ai-Remake:

Well genocide and mass murder is my favorite album by them so probably Sou-Ai-Hazuki, it’s not really fair for Hazuki since he only recorded 5 songs and imo none of them are the best version of the song. I do prefer Hazuki to early Ai though (the first 3 singles he was on.) It’s a shame Sou limited his vocal style so much in deathgaze because some of the harsh vocals he used in Be≒Luna could have sounded really cool in deathgaze.

Unironically this. The only answer is Ai.

Hazuki had the voice that Ai wanted and everyone can tell because he’s been obsessed with chasing that sound ever since the beginning, but to be fair Hazuki was around for one single so he can’t really count. He sounds way different between DEATHGAZE and early lynch. and took time for his vocals to peak.

I put Sou underneath Ai because Sou spent all his time trying to sound like Hazuki instead of himself. It sounds super forced and he never quite got there. Also, I heard rumors Ai berated Sou for not being good enough until he left the band and then Ai had to take over.

And dear god those first few releases were rough. I think that taking vocal duties humbled him in some fashions. Eventually, his voice became synonymous with DEATHGAZE in my mind, but that didn’t happen until after THE CONTINUATION. So to me, they just kept upgrading vocalists all the time.

Ai and it’s not close

Also, I heard rumors Ai berated Sou for not being good enough until he left the band and then Ai had to take over.

Oh, that could explain why he questioned himself about being a singer and one of his old blog entry that said “あんたのやったことは許される事じゃない。
大人として 人間として 絶対にやっちゃいけない事だと思う。”

Even when he was not the singer, he was obviously involved in the main ideas of the vocal lines, lyrics and arrangements. The way he became the singer after Sou left just shows me that he finally felt confident enough to follow his own visions. The fact that even in his new band DARRELL he re-recorded the old DEATHGAZE songs means he still cares deeply about them. So even if Hazuki and Sou originally attempted to fulfill his vision, it’s only natural that he is the true voice of DEATHGAZE. Even though he may not be as talented as Hazuki, to me he is and always will be the “best” DEATHGAZE singer.