DEVILOOF tweeted that a new song will be released on April 23, their first new song in nearly two years.

*apparently the forum doesn’t like this format because the band’s username has underscores before and after.

DEVILOOF have announced their 5th(?) single, entitled NEWSPEAK to be released on April 23, 2021 for 1200Y. Pre-orders have begun on their webstore, which will be the only way to obtain their release, much like their last double-A side single. 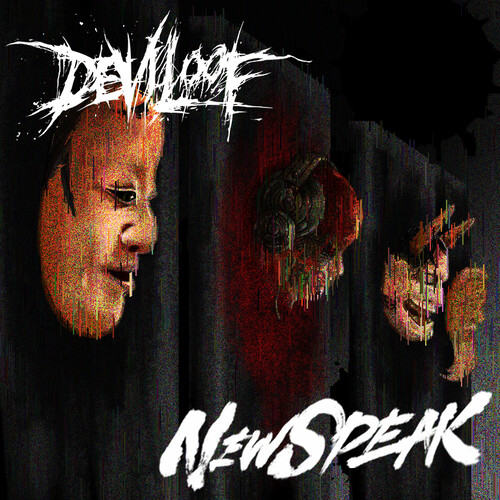 Hmm what a weird album art.

The band has uploaded a preview of their single to their twitter … which again won’t nest properly because they use underscores in their name.

This ist amazing. Will Loop Play it for sure haha.

has anyone any idea what is happening here exactly?
for me it looks like they just put as much “cool” clips as possible in the video.

Not all PV’s have a narrative. I know the band has spoken numerous times about mashing together traditional Japanese and modern metal/core, so the theme of the PV seems to be surrounding that.

This was insane i loved it.

The title and some of the imagery reminds me of 1984, particularly the TV’s as well as the guy strapped to the chair and the shots of the silhouette in the distance. As much as I want my theory to be true I think patientZERO is correct.

Well the concept of Newspeak comes from 1984, so there may be some allusions to it in the music video for sure.

My copy of the single is in the mail floating above our heads as we speak, so once it comes in, I’ll upload lyrics if anyone wants to translate them and maybe we’ll get a better image of the meaning of the song other than what they’ve told us through interviews/tweets.

The lyrics have been transcribed (to the best of my ability) and posted here.

To be honest I like Mob rule more than Newspeak.
Both are great songs regardless.