DEVILOOF has announced a oneman event entitled To the DYSTOPIA for September 17th and 18th, in which they will play their entire discography across the two dates. This means each individual date will have a completely different set list. 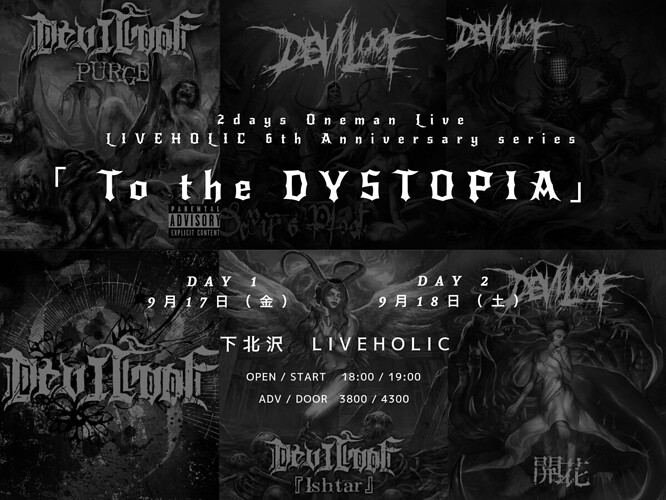 Bassist Daiki has also tweeted that this may be the first and last time they’ll be able to do such an event as their discography and song catalogue grows. He goes on to mention that a serious announcement will be made at the end of the live event, as well. 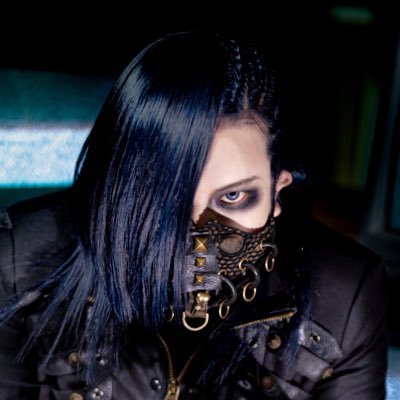 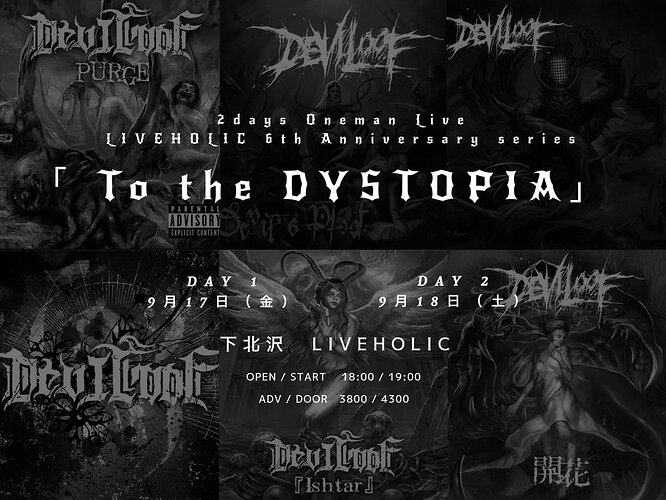 I wonder with their music being pulled from streaming services, what this means for the future of DEVILOOF. My mind instantly goes to disbandment since I’m a pessimist, but Daiki’s tweet says that their song catalogue is growing and if they were disbanding, I don’t think he’d mention something like that. My only other guess is that they may be changing labels, but it feels like just yesterday that they joined 9th Records (as their only band, I believe). Maybe they’re moving entirely towards self-distro, given their last two singles have been sold entirely by them.

I don’t think they’d disband anytime soon but I also thought that about Nazare so… Hopefully it’s a new album or something. If they do end up disbanding I’ll probably die. After translating the tweet it says as the number of songs grows it won’t be possible to do something like this in the future, so I think new songs is the most likely thing.

Yeah, I mentioned that in the post. It’s the main thread that makes me think optimistically about the announcement, though I could also see them doing self-distribution from now on. Maybe a multi-month release campaign or something.

they’re dropping VK i guess, or changing name + label with no ownership of prior material.

I wouldn’t think they’d drop VK since it’s entirely what their gimmick is based around for the most part. They still wear the “most brutal VK band” badge of honor. But I could see maybe dropping their label and/or a member leaving. Kanta recently had brain surgery and had been expressing some health issues as well as playing support for other bands, so maybe he just wants to be a VK freeter and focus on his youtube channel.

Man, why you guys all so negative? Just because there is a “serious” announcement doesn’t mean it’s a bad thing. Maybe they’re getting signed to a major/bigger label? Maybe one member will leave but is already replaced as they Hope to move on. Anyway, forget speculation let’s just see what they themselves say at the time.

It’d be a shame for them to disband, so I’m hoping they’re just getting around to changing their name/label.

My guess is that someone is leaving. I don´t know how´s COVID in Europe but if it´s gotten better maybe this time they´ll actually get to perform overseas? That being said I don´t think it makes much sense to announce an european tour at the end of a 2 day event in Japan lol

I would buy a Blu Ray of those shows in a heartbeat.

I really dont think its a disband, the maximum negative thing I can think might happen would be a hiatus and the drop VK thing I also dont believe it 100% because even though in newspeak Keisuke was less VK all the other members had VK visuals.
Its probably some merchandise