The footage from DIR EN GREY’s 2DAYS LIVE “THE FINAL DAYS OF STUDIO COAST” at STUDIO COAST venue, which closed for good in January 2022, is going to be released as the next live Blu-ray & DVD.

Playing at STUDIO COAST for the first time back in 2004 (and a total of 71 more gigs there in the subsequent years), DIR EN GREY wanted to make a very special last 2-day performance by giving their all once again in order to treasure all the good memories created so many times before at this venue by both the band and the fans.

Everyone could feel the excitement from the very beginning until the moment the last music note faded into the air at this live house which had become something very similar to a home for everyone, with the band holding very strong feelings of gratitude and respect and the fans fully enjoying the performance even when they couldn’t go as savage as always because of the situation the world is going through right now.

It is because it was a 2-days performance full of countless exciting and emotional moments at STUDIO COAST that we would like everyone to enjoy the performances just as they were, without even one cut or edition on them. 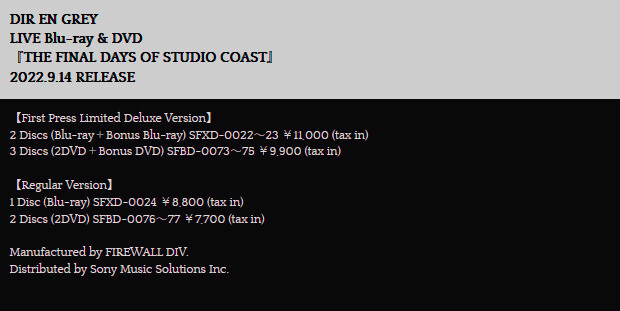 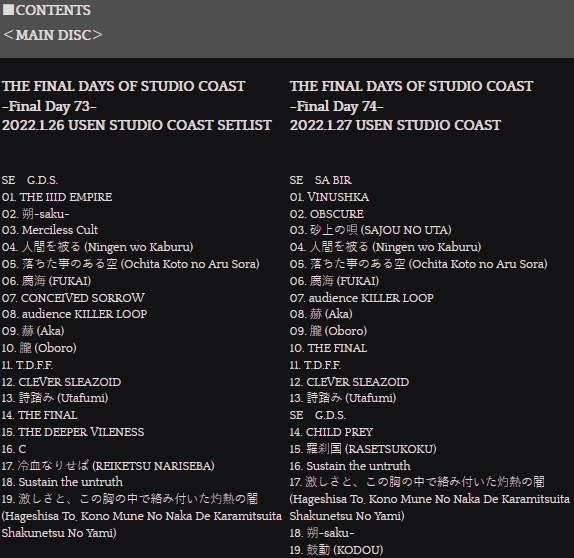 Very interesting setlists for both days.

shame that half the set is the same but still its always good to get more live performances from these guys for me.

im curious about the bonus dvd. i wonder if we will ever get that Jealous performance…

ooof everything they put out is a small fortune anymore

Rather anything that involves Kyo

With you on that one! Gotta agree that itd have been nicer if the setlists for both days were completely unique but theyre both great setlists so screw it, im down with it. I kinda hope the bonus disc is a sort of documentation of their history at the venue. I know it seems specific… but it could be interesting to hear about all the experiences theyve had with shows their from their first to the last.

Completely missed this. Ordered along with Petit Brabancon’s album.

(that said, there’s like a 70% chance kyo n friends still get my money on this in the end)