1m
I was surprisingly glad to see Way of Life’s music video uploaded today, since it was one of my favourites from ETOILE! (Although that goes without saying, since I have so many favourites. ETOILE, PANDORA, NIGRA, TINTA ROSIA, R.I.P… I love them all.

) After Yumishiro-san’s first two singles, I was wondering if he’d be mainly sticking to ballads, but his 1st album opened my eyes to reality! Not only because of the sheer variety of styles, but seeing his music be at its peak level of performance was such a treat.

And wow, I’m absolutely fascinated by all of this trivia! So Way of Life as a song was originally intended to release much earlier? That makes sense, since it happens to be a revised version of a former piece of his. I like how he had the song name keep a similar meaning in the end, but made sure it’s more extravagent, to go along with the rockingness of this particular song.

Listening to Michi right now, and I can hear all the violin parts in place of what is now Way of Life’s vocals/lyrics. Both the cool-deep verses, and the higher-pitched fast choruses. It makes for such a surreally satisfying experience!

By the way, I checked Yumishiro-san’s former solo project back when he was Hikarito upon mention of all this trivia, and oh my! “With You” is such an amazing song. It’s definitely my favourite work of his from that project. The electronic beats and rhythmic choruses I can bop my head to, even despite their softness is so cool! It’s so unique how he sings the song really fast, in spite of having such a whispering tone. I don’t think I’ve ever heard anything quite like it…

It really goes to show how no matter the piece he makes, they all their own unique role.

I may have only been into Aiolin shortly before their disbandment, and only recently became hooked on Kanata Yumishiro-san, but I look forward to more and more content of this skilled gentleman who is now among my top few favourite artists I want to actively keep up with!

Well, according to Yumishiro-san, “Way of Life” is the original version of “Michi,” for the rock n’ roll version came out before the violin instrumental version did. I thought it was the revised version, but it turns out to be the opposite lol
So you’re still new to Yumishiro-san. Welcome to the ETOILE family!
A little more info for you: before he started his activity as a visual kei artist, he used to be a lead violinist in an orchestra. In 2014, he released his solo violin album “Michi,” which is the one I mentioned above. Hiroto is his real name btw.
The album was digitally released in 2019. Here’s the link: 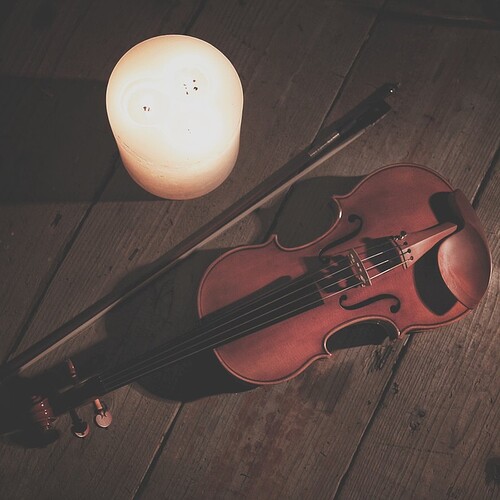 You may want to scroll down the page and have a look at the album chart below the track list before you jump to spotify. Hope you’ll enjoy the music

Yes! I not only liked it, but so much more! Haha, you made me realize I went on writing a lot more than just the one song.

Oh wow, I appreciate you clearing that up for me. It’s super interesting for me to realize he prioritised the rock & roll iteration as the preliminary piece, before instrumentalizing it with his trademark violin later.

Yeah! Due to still being a recent fan, I’ve greatly appreciated being able to read your posts to help keep me up to speed with this highly respectable artist.

And thank you for your enthusiasm in sharing his music in hopes of having any prospective individual be appreciated as yet another ETOILE!

Oh, really?? I knew he had graduated from a renowned university focused on the arts, but the lead player of his instrument in an orchestra as well?? His credentials continue to amaze me, how inspiring!

Wow, it’s not always that I get to learn the real name of a visual kei artist. It’s somewhat similar to Hikarito, so I can see how he came up with that as his former stage name.

Okay! I’ll take a look at this instrumentally-driven earlier work of his!

Starting off the album with Sora, I enjoy how there’s a “slap-like” acoustic guitar playing featured in the piece. I originally thought NIGRA may have been the first time Yumishiro-san did this style of guitar playing in his music, but it seems not!

Also, the chords for the violin starting at 1:32 and extending until 1:47 felt SO nostalgic and emotional to me for some reason.

I must have heard a song with similar series of notes played in the past before!

The fact that it reappears at 2:47 on a lower octave, only to make the melody slowly get higher and higher, all the way to 3:30 just makes it even better.

Moreover, the soft piano sections in Sora such as at 2:02-2:15 made me have an image of light water droplets, coming from a sky that isn’t completely cloudy.

It feels refreshing knowing how my own interpretations for these songs will always be valid, given that there isn’t a world of lyrics to follow, which sometimes proves difficult for me as someone with a thin line of listening comprehension when it comes to Japanese.

Moving on to Suisya, I can already feel the extra classiness in this song, almost as if it even has jazz influences with the fast and suave note transitions.

The piano solo starting at 2:04 was feet knocking! That wasn’t only surprising, but beautiful.

Next up is Ashiato! This one is definitely the most melancholic and slow piece, so far. It feels most befitting to the album cover too, as I get a dimly-lit sceneries within my head from it, even when the violin plays higher.

Gosh, those quick acoustic plucks to end the piece with its vibrations fading into the distance was so satisfying! It gave a unique bell-like sound I didn’t even consider being able to hear from the guitar from that song…!

Now for the song with the longest name and duration in the album, Harukanaru Negai! This one also isn’t upbeat, but it feels more varied. As for some reason, I get the impression of a journey of emotions throughout each chorus, where the violin takes over. Perhaps that can be attributed to how long each chorus is, but the chords themselves are definitely doing the trick as well, due to the high-to-low notes.

It’s delightful how the piece ended off with the piano mimicking the chorus at the very end, for a more suitable finish!

Now back to where it all began, Michi! So the song is slightly shorter than the 2021 version of Michi, but still longer than Way of Life, interesting…

I would likely need to analyze the differences between this one and the 2021 version to have more suitable points to say than what I went over previously, but that’s beyond my current willingness.

I apologize for that, but I hope you can at least accept my honesty!

In any case, let’s shift over to Suiku now! This piece definitely sounds more happy than Ashiato, as there isn’t many quiet or hollow sections to speak of. Instead, the parts have a great deal of texture incorporated to make for everything feel full. Much like Michi did for me, for some reason the violin choruses remind me of Yumishiro-san’s vocals in another past song of his, but I can’t put my finger on it.

I may just be overthinking though!

Finally, let’s take a listen to Kika, which feels relatively straight-forward thus far. (>30 seconds in.) Well, the melody has just changed and become more interesting! And the frolicking high notes at 1:03 and onward feel so classy.

Oh wait, this part at 1:29 is just a higher octave of that former melody I dubbed “interesting”. The transition into it was so natural that I took a while to notice!

Wow, I almost forgot about the violin, it came back at last. So then… that means this must be the piece with the least violin parts in the album.

Gosh, I don’t even know what to say in the latter half of this piece now. The piano is just at the best its ever been!! I love how energetic and high the keys are, the way they synchronize with the violin at brief parts, everything…

Whew… that’s a good note as any to end off the album, I’d say. Thank you for sharing it to me!

For my top favorites out of the trove of songs, I’d have to pick Sora, Kika, and definitely even this version of Michi.

By the way Miss, please pardon my overcaution about this, but what is the preferred name you would like to be called?

Also, there’s one more thing I’d like to be pardoned for. That is… how I’ll end up being quite late on replies from here on out, due to the nature of my weeks at hand!

However, I’ll definitely be back to reply again sometime, I promise.

But I at least wanted to give one more reply for now, to show how dedicated I am for Yumishiro-san, as well as your efforts.

I look forward to seeing you around, as another fellow ETOILE and ReVeller!

What a review! You should send your review to Yumishiro-san. I’m sure he’ll be very happy when he receives your fanmail. He can understand English, so no worries

Nice to chat with you here, Shimon. You can call me Yuki, or Emily if it’s more convenient for you to call me by my English name

That’s very sweet of you. Looking forward to your next reply