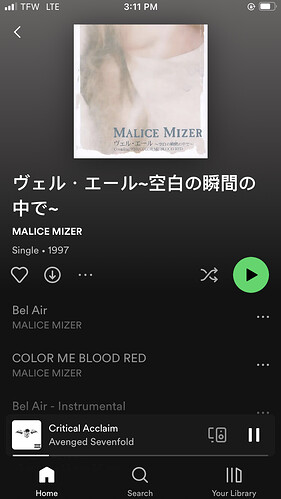 I saw it while walking home, should’ve kept my phone on bc now that im in my home I can’t find it anymore

I believed this was genuine bc it looks like how I imagine it would and I think on manas Twitter somewhere it said he was trying to stream MM songs everywhere? Not credible from me so unsure, but can someone pls elaborate if you find this

It was uploaded illegally and taken down apparently.

Yeah that’s what I thought. Don’t know what I was expecting but thanks

atleast it wasn’t just me who saw it

I think a few weeks ago I saw the same thing. I liked a few of the songs but it got taken down after a few days. For some reason their Ma Cherie still plays on my like songs, but when I go to the account for it no songs show up. Idk how songs work on Spotify, but maybe it got unlisted.

It has happened a few times already, it’s probably even the same person uploading it. I wouldn’t treat it as an official upload unless Mana (or any of the ex band members) announce MM music to be on spotify on any of their official social media accounts. The chance that that happens is really low - if I am not mistaken their material is partially owned by a label and the band has no rights to it, or am I remembering this wrong?

No yeah I think you’re remembering it right but sometimes I get MM mixed up with Moi Dix Mois’ and their label, which is under Mana’s own label Midi:Nette. I’m sick of ppl getting my hopes up for nothing