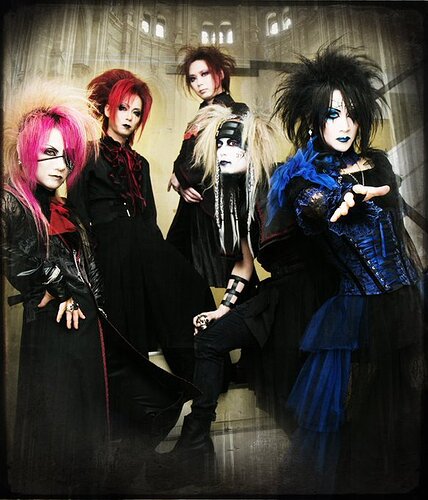 Moi dix Mois was one of my absolute faves when I was first discovering vkei tbh. I don’t remember how I first got to know of them but when I was in high school there was a tiny group of kids that were also into vkei and while they were all over stuff like SuG and An Cafe, I was purposely seeking out stuff that I thought was weird or creepy and came across them. I really liked Mana and wanted to follow his projects so I kept up with them for quite a while before I left the scene and when I found out about K I was really sad because he was my favorite member

These days they’re more a nostalgia trip than something I listen to often tbh.

They were one of my first VK bands. It’s crazy how popular they and Mana (as well as his former band Malice Mizer) were in my country in the early to mid 00s. If you were a fan of Anime or japanese Media and/or music you had to know them, at least by name. I knew several people in the local anime/manga fancommunity who were absolutely obsessed with Mana and tried to dress and look like him 24 hours a day. There were even two self proclaimed “Visus” at my school who had their bags plastered with pictures of him. There were loads and loads of fancontent about MdM, Doujinshi, Fanfics, Fanart…

I used to listen to them a lot too and just like Jenova I liked to show them and their music off to “scare the normies”, because I was one of those Mallgoth kids who started with bands such as Nightwish and Within Temptation and I wanted to be daaark and edgy. And Mana at that time really seemed like an extreme guy.

I kinda grew out of their music as well. And I feel that’s true for many if not most of the former Mana-fanatics. Barely anyone of that time is still that obsessed with MdM and many don’t listen to any VK or japanese music at all. Sadly the band itself has also kinda vanished into obscurity and unimportance. The huge gaps of inactivity and lack of new material and releases probably caused a lot of people to loose interest. Sometimes I wonder if they are even active until a small news update reminds me that MdM are still active (somehow). They aren’t really considered as essential either and plenty of newcomers to VK haven’t even heard of them.

Strange to see a band, that was once so popular and famous, to fade away and become obscure.

In a small way, I can’t help but think that Mana likes it this way because he can coast off both his fashion line and from being in Malice Mizer and MdM. Like yeah I kinda wish MdM was still a thing but if he wants to let his stuff fade into being his legacy then there’s nothing anyone can do to change his mind u kno

I’ve slept on this band for years. Any pointers as to which album might be best to start with?
Does each one have a different flavour (like Malice Mizer)?

Honestly i would go through their discog in order. It doesn’t change genre either. They’re an excellent band so you’re in for a real treat tbh.

I always loved the sound and I can’t stop listening to it. It’s old but it’s gold.

One of my all time favorites, really. I’ve loved basically everything they’ve done. It’s a shame that whatever album they’re working on now has taken to the way of X Japan and becoming more of a concept than an actual work that there’s any news on. Maybe we’ll get some this year, but I’m not holding my breath for anything new.

I literally started with their 2nd album “Nocturnal Opera” and I think it’s a good start. but if you’re not a fan of Shaura’s voice, you can start with “Dixanadu” in my opinion. then, “Reprise” is a great choice for nostalgia. my least fav one is “D+Sect” since it feels like a bit off their regular style.

btw, am I the only one who was actually into Brain Hacker first and followed Seiji to MdM and surprised about it back in the days? lol
same story with 秋葉原少年団☆電脳ロメオ and ViViD. why the heck I always started to love a just broken-up band and followed their vocalist to another new band after months is beyond me

believe it or not, I didn’t know the existence of ViViD until 2011 around, I’m a bad fan

Miss you Kazuno,Kazuno is my Favorite Japanese Bass Player and i like very much Moi dix Mois and the new guys are Talented but i’ll never Forget the past era with Juka, Kazuno, Tohru and K was an Amazing era for me and i have cry when Kazuno has leave the band Moi dix Mois and was the most Bitter day of my life!

I want Mana to stop making food videos and finish the album. bless. 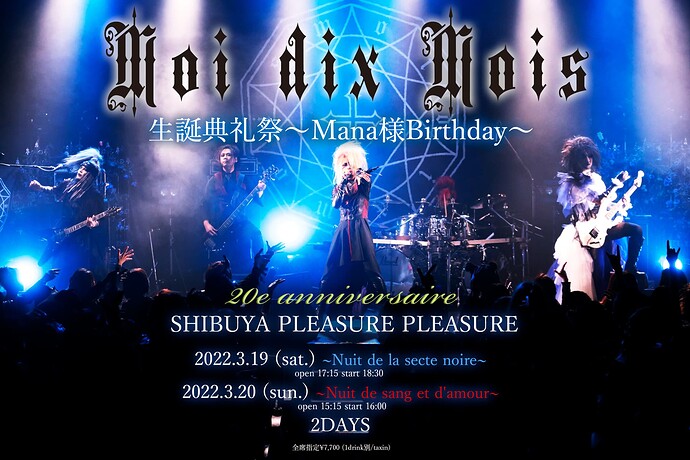 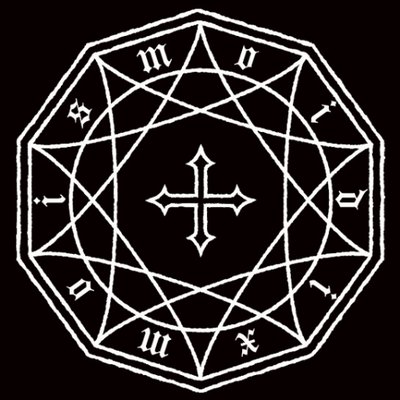 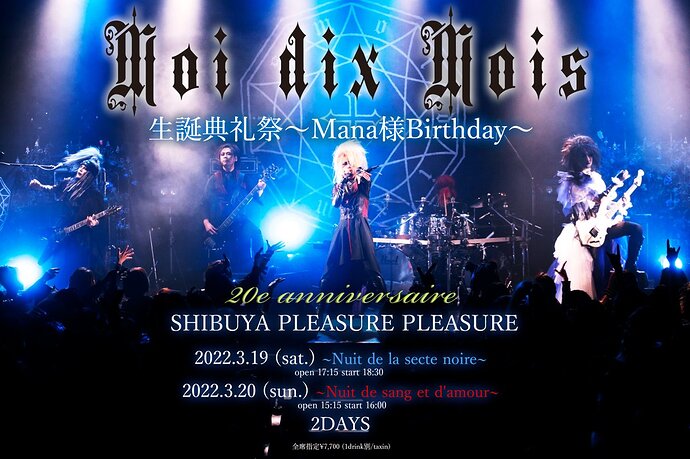 Hopefully they’ll announce some details about the new album around that time too… god knows how long it’s been in the making already (unlike the X Japan album, I’m having faith in this one being actually released and being actually decent, lol).

I admittedly don’t have a lot of faith that anything that was announced before the pandemic actually occurring lmao. It’s a pretty good cover-all for an excuse as to why your work isn’t done.

Watching a show from 2020 and I haven’t seen this band’s live footage in over a decade and they’ve aged like a fine wine. Seth’s voice has gotten better somehow, and Ryusuke is a good fit with this band.