SARIGIA will disband after their last oneman live at Ikebukuro Edge on 1/27, the same day where they will release their best album, “SARIGIA THE BEST - 2020.07 ~ 2022.01 -” (title is unclear on the flyer and on the album cover sample) 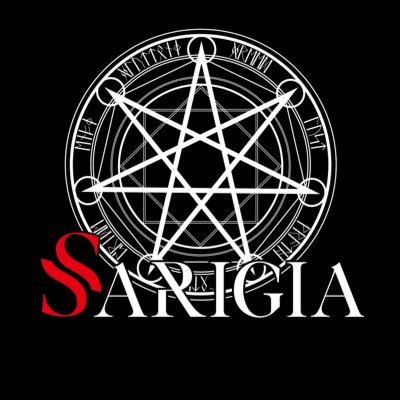 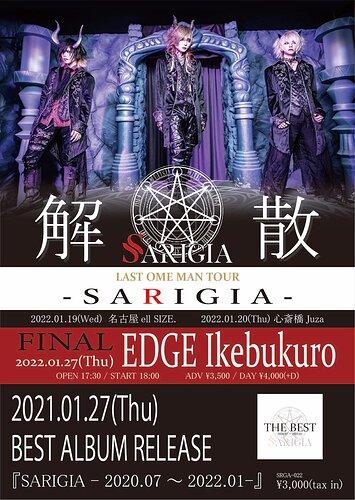 I stopped listening after mizuki but this still makes me sad

Saw this coming a mile off. They’ve been a bit lacking for a while now.

Tha was a tough year it seems, writing on the wall and all that, that’s still sad.

Well hell. RIP. Can’t wait to see where everyone lands.

I’ve been following them closely, especially since their 1st anniversary (been in Tokyo since then). Always in the center of the 2nd row. I went to the Halloween oneman yesterday where they first announced this on stage.

They’re not disbanding because of health issues, disagreement on musical direction or anything negative between the members. They wanted to make very clear that the 3 of them are very close. They decided this because they’ve been unlucky with losing 2 drummers and not being able to grow their fanbase. They don’t want to drag on the sarigia they love and potentially damage their friendships.

Even though this news didn’t really surprise me, I am sad. I’ve seen them being at their highs and their lows: cry from happiness as well as from disappointment. They struggled a lot but tried to stay positive and productive until now. They were clearly not lazy or money suckers. They were very kind and humble.

I will continue supporting them and hopefully at least attend all the Tokyo onemans that are left from now and hope they (or at least my chill boy Asuka) will start something new.

Mizuki was a piece of shit, but the man could write songs, RUIN, DECAYED, AGARTHA is top five best vkei singles of all time, especially RUIN. I feel like Asuka was at his best there regardless of people calling them GazettE knockoffs.

They started really strong with the first lineup but I completely lost interest in them when they changed direction in their music and looks.
I hope Asuka and Natsu will continue in new projects

This is a sad news…
I really like them, no matter they change their musical direction or not,
And their disband does really hurt!

Very sad, I prefer their early stuff but I still liked all of their stuff I’ve heard. I don’t think it said if they were done with making music completely or not but maybe they felt like they had done all they could with their concept and whatever ideas they had for future music wouldn’t fit under Sarigia’s concept so they felt like if they want to continue making music they should start a new project and have a completely fresh start?

to be honest with you diane…i’m not surprised

Please read my comment, it explained what they said. I was at the oneman where they announced this.

??? I did read your comment before I posted I don’t think anything I said would imply that I didn’t?

Also most band members who decide to “retire” from the scene do mention it. They didn’t say anything about quitting vk/music. Just Sarigia.

I thought your first post only said they were disbanding because of being unlucky with drummers and not being able to grow their audience, my post was just wondering if maybe they also felt like they had done everything they wanted to with their current concept and if they might start a new project neither of which I think your first post had an answer to? Sorry if I’m misunderstanding something.

You don’t have to justify yourself to the vkei supreme beings here. You’re allowed your own speculation on the situation. Clearly there are many factors to Amy given situation which can’t all be realised let alone explained at one moment in time.

Huh?
I’m just sharing what they actually said, because they explained more on stage than they did online? Speculations go over what the band members actually tell their fans?

Just because someone knows more about something, doesn’t mean they’re trying to be a “supreme being”.
I was always a bit disappointed that most people on here were kinda negative about them since Mizuki left, but I didn’t try to correct anyone until now. There is a difference between opinions and facts.

And just because you go to shows doesn’t mean noone else’s ideas may actually be right. There may be things behind the scenes the band members don’t want to show to the audience so just because they don’t say it, doesn’t mean it’s not a possibility at all. So get off your high horse and just try to accept different ideas rather than ONLY accept what you’re given at face value.

You come to a sarigia topic to just be negative about sarigia and degrading towards me. Who’s on a high horse?

Edit: I never said someone is “wrong” or can’t have a certain opinion. You on the other hand, start calling me names right away. I think that was more unnecessary.