I noticed there wasn’t an artist thread for SCREW (which makes sense since they disbanded 6 years ago). I was kind of curious what peoples general impression of them was haha

I personally started out as a huge SCREW fan. I randomly came across them on Jpopasia and watched the KAIROS music video for the first time back when I was in grade 9 and I was hooked. I consumed all their music heavily and would have fought (jks jks) anyone who said they weren’t the best VK band ever.
I taught myself how to play all their songs on guitar and uploaded a few covers on YT here and there (they’re mostly all gone now I think). I’m not really sure why I was so enticed by them. I was a big fan of Byou’s (studio) voice and melodies and really enjoyed their guitar work and compositions though there was nothing really ground breaking or special about them.

I started falling out of love with them around their Major debut period. It may have been when Xanadu came out. I just remember strongly feeling disappointed with that release and I think by that time maybe my tastes had “matured” (i.e. started looking for more interesting compositions/went back to north american bands like Dance Gavin Dance). ANYWAYS this is all to say that I went quite cold on SCREW and aside from enjoying the odd release like CAVALCADE (which I think is one of my top 10 VK songs, for no specific reason haha it is fun to play on guitar) or Red Thread, none of their newer drop tuned (A lot of their songs ended up being Drop Bb or B) music really caught my attention. However, during a study sesh this past week I decided to run through some of their discography on spotify for lols and ended up doing a listen through of psycho monsters… and I wasn’t impressed per say, but it definitely made me go “huh, I’m starting to remember why I initially liked these guys”.

SCREW to me has always felt like a reliable, safe 6-7/10 band. They have their highs, and their lows, but they’re largely consistent. For better or worse haha.

Anyways I apologize for the wordy rant. I felt awfully nostalgic listening to them and thought it’d be fun to see what other peoples opinions were on them. 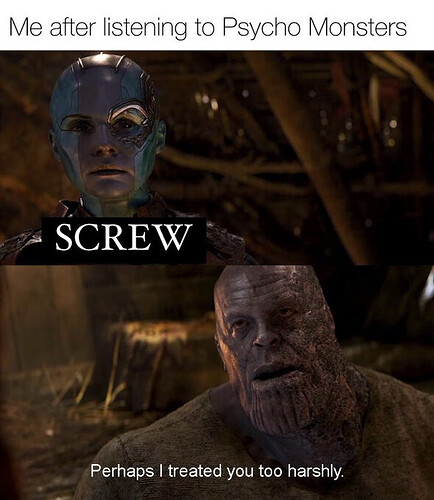 Man what a throwback. I had a short spell where I followed them. For me personally they peaked at Duality. That felt like an album where the compositions were solid and Byo’s singing was much better. I haven’t listened to it in ages but I can still remember the melodies vividly. They’re that catchy. It doesn’t have my most favorite songs by them, but I think it’s the strongest single package they’ve done.

That album also felt like a turning point where they lost a lot of their original character tough; no more harsh vocal filters, generally less darker music, and they started incorporating a ton of electronics.

Fusion of the Core, Venom, and Virus are still special to me. I think some of their best songs are from those releases and that’s when, IMO, their sound was most unique and made them stand apart from other vkei bands especially at the time. I too found their major sound to be really challenging to get into. I’ll always remember them fondly for their indie days.

So here’s the thing about this song…it’s included on three releases: VENOM, TOUR09, and BRILLIANT. The first one is pretty early in their career and isn’t on streaming services. BRILLIANT also isn’t on Spotify and I couldn’t find it for purchase digitally. That just leaves TOUR09, and this track isn’t available in any form digitally. For a while, I wasn’t even sure if this track was actually on this release. I bought the release to confirm, and then I worked with @koutetsuhime to extract the ly…

past misconceptions about music

I got another misconception that might also double as a hot take, but I actually am coming around to the impressive musicianship behind early SCREW. I say early SCREW because I can only find tabs for that period, but holy shit guys, the guitar parts go in. Look at these tabs for example. The song is 105 BPM but they play in double time so it’s actually 210. Tons of harmonizing chords, hands flying all over the neck. Neither guitar was slouching and neither was the rhythm section. RUIN AND DREAD also happens to be one of my favorite SCREW songs!

Same deal with KAIROS as well. It’s a bit faster than RUIN and DREAD, but it’s a bit simpler in exchange. A bit. It would still be really tough for me to play competently at full speed at my current skill level. Even 幻影の鎖 goes in.

I might seriously have to give X-RAYS another listen…

I also fell off when they went major because it felt like a lot of their melodies were losing their focus. Them losing aggression and going lighter didn’t help, but even when I listen to the melodies in their major career they aren’t lazy or bad, just not vibing with me. But that’s okay, because I can spin early SCREW for quite some time!

For me personally they peaked at Duality.

Duality was definitely the peak… and I lost interest pretty quickly after that.

(But secretly I loved sloppy, early Screw too… Zansatsu Fiction might be one of my top 25 VK songs)

Zansatsu Fiction is a great track! That whole mini-album is underrated really. Thirty Revolver was my jam.

The first mini-album and their first album were a 10/10. It perfectly fit in that era. Zansatsu fiction, BABY STAR, S=r&b, Vegas,…

I saw them at J-ROCK INVASION in Cologne in 2007 with all the other PSC artists and then again in 2012 when they toured Europe. Unfortunately the 2012 show was really really forgettable and they were only half as entertaining, especially with Byo dropping his sexual and “I’m pretending to be as gross as Kyo in Obscure PV” attitude. I completely lost my interest in them when they started their 2010s kira kira era in like 2010/2011. They didn’t release anything that caught my interest after that anymore.