So Ive fallen pretty hard into HiFi (High Fidelity) audio gear and lifestyle. Ive amassed a pretty good setup and a nice collection of gear and was wondering if there was any interest here on the forum. We can pretty much just use this thread to post...

Show off your Rig

We had one of these threads on MH a while back for Hi-fi setups, but it mainly resembled a battlestation thread. Just finished assembling & painting the DIY headphone rack on the right-hand side today, so I’m happy how it turned out.

I used to have the worst and most cramped setup at my old place around 2016. I don’t think I even have a full picture of it. It took a lot of sleuthing to track down the first rig: 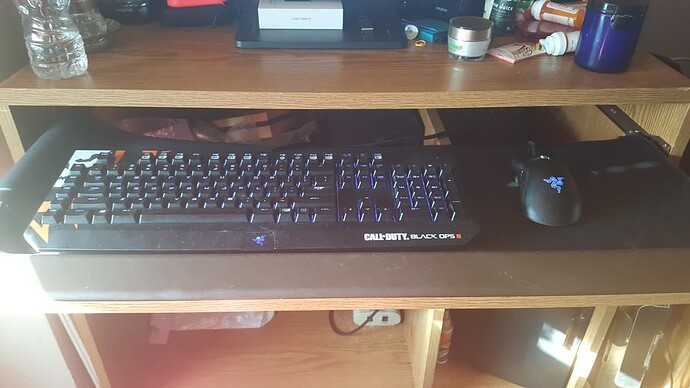 Yes, that was the whole width of the desk. I had 11 inches of mouse space and a 19 inch screen and a rocking chair for somewhere to sit. Eventually I upgraded to a BenQ 24" and it barely fit. But it was a start. 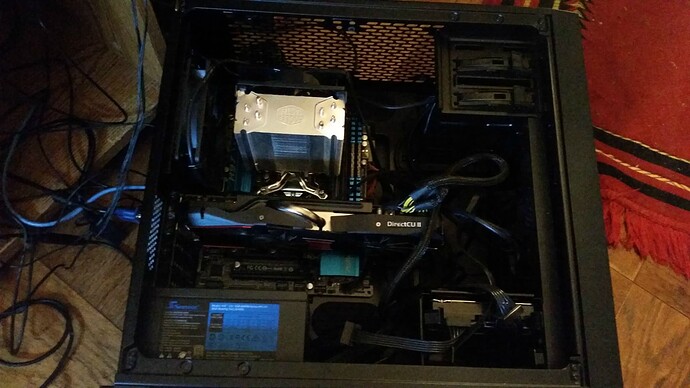 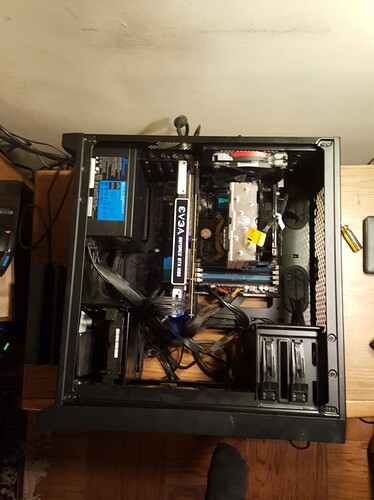 The more I look for pictures, the more I realized I never took a pic of the whole setup because the room was so tiny that it was impossible to get everything in frame. I had so little room to work with that the tower would not fit under the desk, so I had to move the TV, flip this on it’s side, and then put the TV on top so everything could fit. Those were the days…this was after I gave the R9 to my friend and upgraded to the 1080. 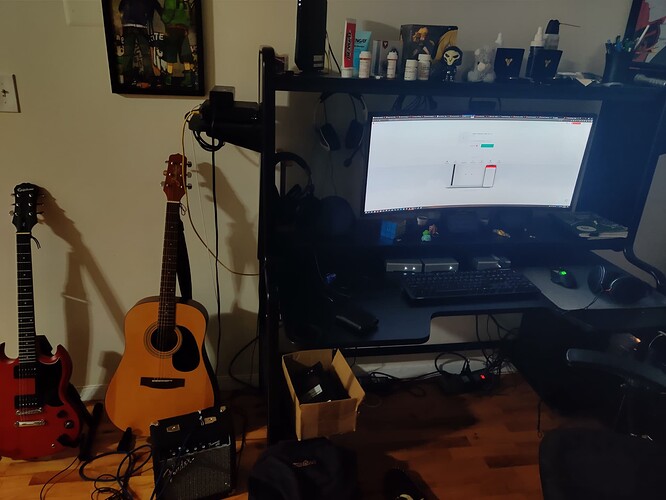 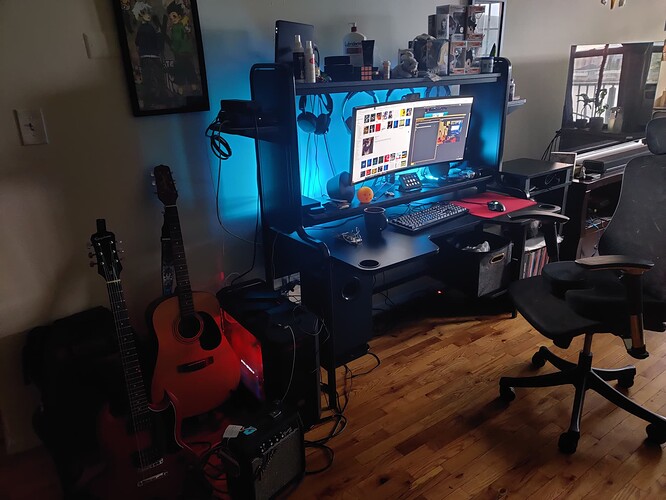 I had the back light for both the screen and the speakers on for better illumination, but usually they are off. I find RGB obnoxious when it’s flashing, so I just stick to one color at a time. The speakers themselves are Logitech G560. These things are absolutely terrible out of the box because they are tuned to stand out in a loud and crowded store. They probably sound great under those conditions because the background noise muffles all the imperfections. Bring this bad boy home and suddenly you find you can’t go over 10 in the Windows volume or the desk will shake and neighbors will complain. No joke. I had enough when I was on turntable with a few guys and I was playing “Bright Red Season” by Thousand Leaves and the song just wouldn’t stop clipping and I knew it was the speakers, not the track itself. I had to install EqualizerAPO and set the gain on the preamp down by 20dB before I even started messing with EQ bands just so that I could adjust the volume. The Logitech GHUB software is also trash and I recommend installing it, making sure a few settings are not checked, and then literally never touching it or updating it until you have to. It’s so unstable. But once you tame these speakers and bring out their best qualities…man these things can rival stuff 30-40% more expensive and it doesn’t require additional equipment or knowledge beyond basic equalization. Good hardware crippled by terrible software and business decisions.

Ultrawide is life - some people swear by two screens but I’m a no bezel boy. I’d rather have one continuous screen and move windows around as I need - after all the operating system is called Windows. I think 34 inch ultrawide is the sweet spot for gaming and general usage - my friend has a 49 inch ultra wide and that’s insane even for me.

If you look behind the screen you’ll see about $1000 in headphones. I’ve given some away since 2019 but I still have (from left to right) the Steelseries Arctis 7, Corsair VOID, HyperX Cloud Flight (stay away this model is trash) and Sennheiser HD 600. Out of frame hanging off the side of the vinyl stand are my Hifiman HE 400’s. Gave the 518’s to a friend as a present because I needed to get rid of some. Might throw out the HyperX’s because they buzz every so often when they’re on and it’s annoying. 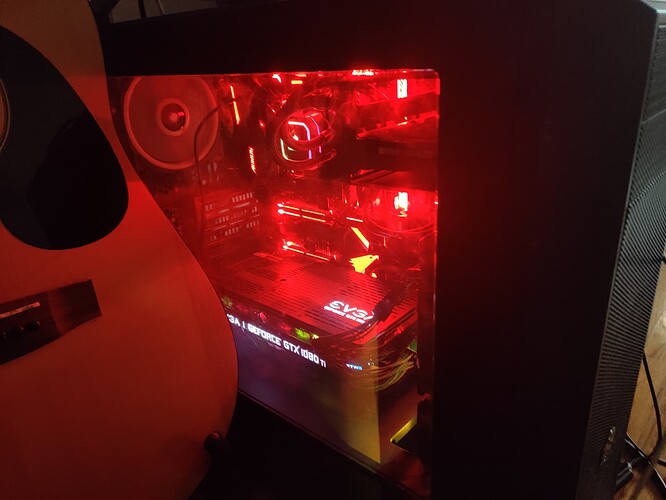 Still running the same equipment as circa 2017 - 8th gen Intel 8700k, 1080ti GPU, and the last thing I added was the Corsair AIO so my rig would be quieter. I replaced my motherboard so technically it’s new but it’s the exact same model (Z370 AORUS Gaming 5, more of a note for future me when I inevitably forget) because the one I bought to replace it (some ASUS model) was DOA. It’s not top of the line anymore but it doesn’t have to be to crush literally any game I throw at it that I care to play - and right now that’s zero so the statement is still true. The newest hardware doesn’t impress me enough with performance for me to warrant an entire rebuild and up until recently the prices were super unreasonable for any part I wanted. 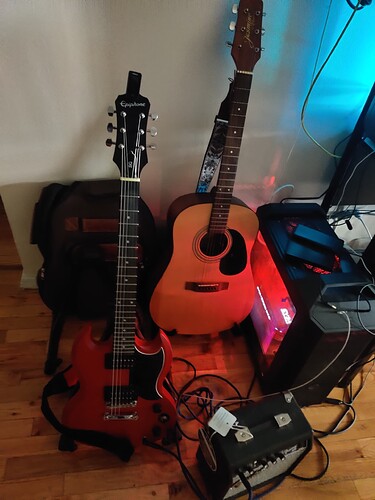 The red axe is an Epiphone SG. The acoustic is a Takamine S35 from 2004 in perfect condition because it sat untouched in an attic for 15 years. All it needed was new strings. I read online old guitars sound better because the wood dries out and becomes more resonant. I had doubts until I played a bit with it and it sounded out of this world. It’s only $150 and all I did was give it new strings! It has no rights sounding as good as it does. Where the bag is is where I would put my Ibanez RG…IF I HAD IT BY NOW!

It should ship soon though.