The Rumor Come Out: Does KISAKI is Gay?

KISAKI is gay is the most discussed in the media in the few years ago. Even it has happened in 2012, but some of the public still curious about what is exactly happening and to be the reason there is a rumor comes out about his gay. At that time he became the massive social networking rumor.

The public, especially his fans are shocked. He just came out with his bad rumor which is spread massively. This time is not about his music career, but his bad rumor. The rumor is out of standardize of hoax, according the last reported this bassist revealed himself as homosexual. Do you still believe or not, this rumor is really much talked by people even in a person of his fans.

This is just an attempt to gain attention, ride the LGBTQ wave, and deflect from his seedy history all at the same time. Don’t get caught in the confusion; whatever KISAKI likes sticking his dick into (or having stuck inside of him) does not distract from the kind of person he has shown himself to be. It has no impact at all.

Kisaki has great taste in what he produces, BUT anything in his private life is his to give out. Outting people is terrible, especially LGBT is EXTREMELY not accepted well in any asian country. Also lots of receipts have come out for his atrocities, i think photo evidence too, but outting people is quite devastating, if they don’t want to put it out.

Tbh I don’t really care. I don’t think it’s anybody’s matter if he is gay and knowing if/that he is gay isn’t really important to me in any way. And if he doesn’t announce it publicly, I think we should assume that he thinks it’s a private matter too and not spread/fuel any rumors.

the obvious joke/reference flying over everyone’s heads though…

Source before this gets moved into Multicolored Hell: 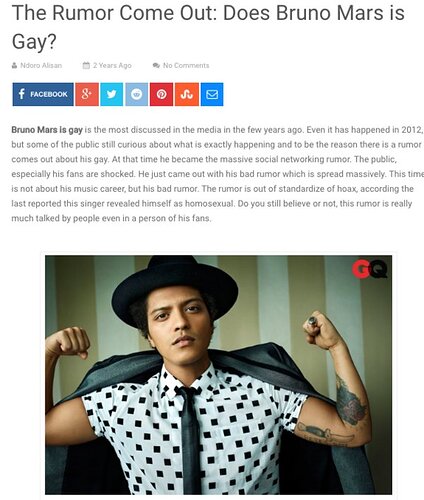 Does Bruno Mars Is Gay?

Does Bruno Mars Is Gay? refers to an engrish article that investigates whether or not pop singer Bruno Mars is gay. It grew popular when it was discussed by the YouTube Let's Play channel, Game Grumps.

I saw kisaki at a grade school in Los Angeles yesterday. I told him how bad it was to meet him in person, and that he should probably leave or i’m gonna call the cops. He said, “Oh, like you’re doing now?” I was taken aback, and all I could say was “yes, hello, police? i would like to report a strange pedo at a grade school,” but he kept cutting me off and going “huh? huh? huh?” and closing his hand shut in front of my face. I walked away and continued with my 911 call, and I heard him chuckle as I walked off. When the cops came to arrest him for being a child diddler, I saw him trying to walk away with like fifteen 2nd graders following behind him.

The cop that came out was very professional, and was like “Sir, you’re going to prison.” At first he kept pretending to be tired and not hear her, but eventually turned back around and brought them to the school.

When the cop was handcuffing him, he radioed for backup to come take the kids back to class. kisaki stopped him and told her to take them each individually “to prevent any pedo infetterence,” and then turned around and winked at me. I don’t even think that’s a word. After he was cuffed, the cop started to read him his rights, but he kept interrupting him by yawning really loudly.

Does KISAKI Is Gay?

Alright, see y’all in another 3 years.

You should have r/whooosh us lmao good job giving me a laugh and roasting us, guys.

IS THAT A MOTHERFUCKIN GAME GRUMPS’ REFERENCE!!!

Though I know this is a joke, to imagine he’s gay when he’s constantly using women til this day is probably what makes it funnier

Being gay isn’t funny, nor is it a joke. It’s just how some people are, which is no different from heterosexuality or any other kind of sexuality for that matter.

Domestic and sexual abuse of women and minors is also not funny at all, regardless of the context.

Dumb meme or not, we should not be laughing at this.

I vote we lock this topic.

He did I seen as him did it