I’m fascinated at the parralels between second wave Black Metal and Kote Kei.

Kuroyume basically cribbed most of their early style from black metal mixed with some post punk, so you’re on to something!

This. This sonic blend is why I love the kote sound so much.

I had another thought that @wing agreed with me on and it’s that the guitarist’s Shin’s departure really hurt the band. I think he was integral to achieving this fusion and their pre-feminism sound overall and he isn’t talked about enough. I would actually go on and say he deserves to be cited as the founder of kote-kei and that his name should be more known. We’ve seen what happens when Kiyoharu and Hitoki duo it up…

So then Shin’s last release he recorded the guitar for was Cruel and he had nothing to do with 優しい悲劇 or Miss Moonlight or was it even further back than Cruel?

All I know is that he left around 1995 officially, but there was a point in time before that where he stopped attending band activities. Not really sure how much of even the 1994-1995 sound was credited to him, but in a larger context they didn’t establish a switch away from that black metal x post punk mixture until the album after his departure. I’m pretty sure he’s got some hand in feminism, however.

His last Kuroyume release must have been Cruel, he’s still credited in the booklet and left the band Feb 15th 1995, about a month before the release of 優しい悲劇.

So by then he’s not credited for anything and there’s no essence of his composition in that release? Just wondering since bands like to use former members stuff after they’re gone cough DEVILOOF cough

He’s not credited for any Kuroyume music from Cruel onwards… composition credits for 優しい悲劇 go to Kiyoharu and bassist Hitoki, for feminism to the two aforementioned and producer Masahide Sakuma, who’s also credited for “additional guitar parts”.

I don’t know if I’d say that his essence completely left the band with him departing. I mean, he wasn’t their sole songwriter and I’m sure they influenced each other musically and compositionally enough so that his influence lingered on a bit. I must say however that feminism is their last release I somewhat enjoy—or more like the weird epilogue to the era of Kuryome I love.

I guess my next question would be what bands became copies of that era of 黒夢? I mean besides DIR EN GREY, not talking Kiyoharu’s vocal style, mostly that style that Shin trademarked. Is VINYL worth checking out? What about GERACEE?

Early Laputa and Deshabillz sounded a lot like first era Kuroyume. The former do so because Aki was a Kuroyume roadie. These three along with Silver~Rose, Rouage and Fanatic Crisis built the backbone of the 90s Nagoya kei scene and in further consequence the late 90s Kote kei sound. There’s a bit of Kuroyume in almost all of the edgier Kote bands.

Early Laputa is about as good as early Kuroyume IMO. Those first few releases are absolutely GOATed. They also didn’t plunge as hard in quality, so that’s nice

I assume part of the reason 黒夢 took such a drastic turn might be Kiyoharu’s obsession with Motley Crue.

Ironic since Generation Swine was released around the time Shin quit the band.

Maybe kiyoharu is trying to emulate the style of that album?

That’s basically what I was getting at. It just so happens that this shift coincides with his departure.

So you’re telling me that their drummer Hiro looked like that and they didn’t take more photos with him? 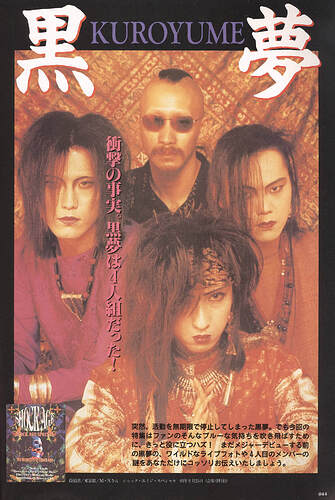 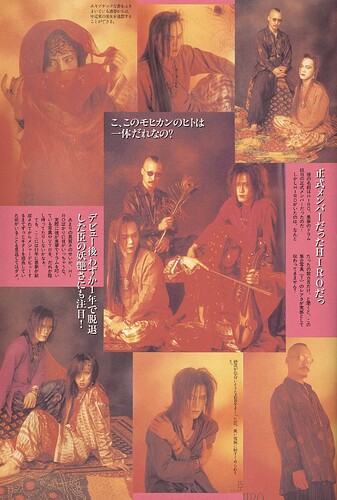 He went on to have a pretty good career, this is him now apparently. https://twitter.com/crowleydrums

What a boss. There are several videos of him and his bands on this channel too. 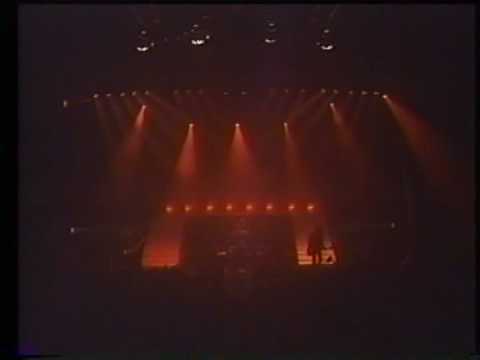