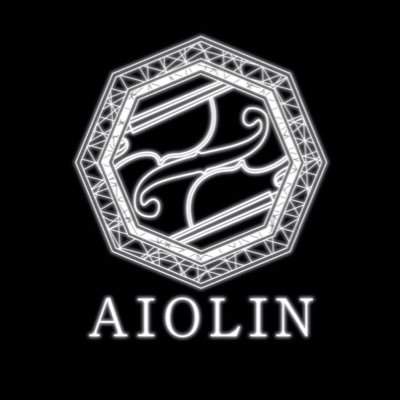 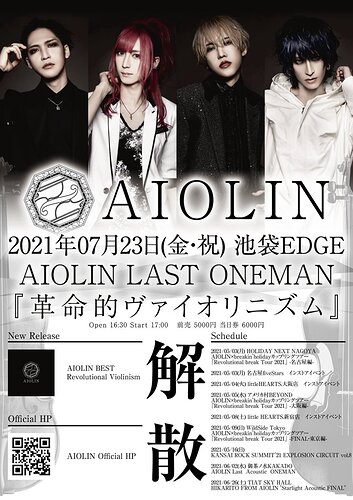 I honestly don’t know what to do anymore. For over three years now, I have loved AIOLIN more than anything and supported them more than anything. Some days, the thought “I have to keep going so I can meet AIOLIN again” has been the only thing that kept me going. I don’t want to live without AIOLIN or Hikarito.

I’ve to say, that this surprised me.

But after reading the comments I’ve the feeling that Hikarito got criticized for his work as composer for being not good enough and he took that to his heart. Musicians always want to proceed, but I think the japanese music industry is to fast for that. Especially when you’re the only composer to a band not having any ghost writers.

It’s sad the the scene looses a talent like Hikarito.
I enjoyed listening to him and AIOLIN, and of cause to watch live.
I will miss them.

This type of disbandments sucks is the reason why I took a break from VK for a while.

That’s so sad, another good band will disappear from the vk scene. I’ll surely miss them… They were one of my fav vk bands and their sound was unique compared to many other artists.

Totally unexpected! I thought they were doing great

did they say anything about the reason for disbanding?
They were one of my favorite bands, I’ve been following them since their debut, it’s sad to see them go

imo Hikarito is insanely talented , like easily top 5 in the vk scene but frankly their songs were pretty hit or miss amongst generic VK fans which is why their popularity was never high. One of those bands that would fair way better in a different genre.

Honestly, despite the violin being a strong selling point, I feel like their music was always a bit underwhelming. Like, I’ve heard a few of their songs, and despite really wanting to like them, I can’t remember anything about them besides thinking they’d be better with someone else singing.

let’s be real, if Hikarito doesn’t retire, this doesn’t really mean anything

the band is basically him and a bunch of support members, if he goes on a solo career or smh that’s just gonna be aiolin 2.0

sad, nonetheless. Most of the time they were super average, but do have a couple of BANGERS here and there

As I understood Hikaritos statement he’s going to quit everything Hikarito related.
That contains AIOLIN, Starlight Acoustic and Viewon. 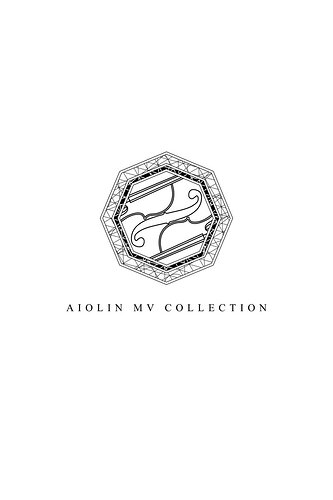 It will be sold at the venue and on their webshop only.

That’s entirely rude to the other members. While it’s true that Hikarito was the core of their sound, even as a Hikarito-gya I’m capable of understanding just how much the other members have contributed. They’re not just support members, AIOLIN has the world created by the FOUR of them. AIOLIN wouldn’t have existed in the first place if it weren’t for Seiya.

damn that’s sad then… Did he gave any reason for this decision? seems quite abrupt, the dude really looks like he loves his music and all

lmao your innocence is kinda cute

So sad to hear. They were fun live~

I’ve never heard their music but if he’s really calling it quits bc someone said he’s not a good composer, that seems like the kinda reaction when smth hurts u. I hope he doesn’t actually quit bc that’s a really sad reason tbh

This is the result of a myriad of things, not all of them creative (you can’t convince me that the EXTREMELY toxic tanu-gya didn’t at least partially influence this) and not all of them involving Hikarito.

We can say the disbandment is a shock but honestly I think that’s because the Aster have been ignoring all the warning signs. Looking back there were lots of moments that should’ve raised flags and for more than just “You-kun might leave”.

I agree with kryr_16. You shouldn’t have made a comment like that. Hikarito is very talented, but that doesn’t mean the other members are not talented. They’re all good in their own ways! Let’s be honest. Reis and Seiya are also good at playing their instruments; You is good at designing, dealing with technical problems, DTM, just to name a few.
What’s more, Hikarito once clarified that he does so many things in AIOLIN only because he wants to do his best as an artist, not because he wants to show off or something. He also emphasized that AIOLIN IS A BAND.
Starlight Acoustic is Hikarito’s solo project, not AIOLIN.
Besides, Hikarito really cherishes and loves the other members.
So don’t call the other members “supporters.” This kind of comment can hurt the other members’ feelings.
I know some people commented and even DMed You that he’s not as good as Hikarito. That’s very rude. Judging from You’s comment on the disbandment, it seems that You may have taken those people’s words to his heart

Hikarito mentioned in the comment that he doesn’t plan to quit. I think he’ll start a new activity with a new name someday.
I was extremely sad when I learned that AIOLIN will disband, Viewon will pause their activity, and that Hikarito will stop his solo career as Hikarito. But I felt a bit relieved when I saw Hikarito’s comment. Hope he’ll come back soon > <
Still sad that I don’t and never will get a chance to fly to Japan to see AIOLIN’s, Viewon’s and Hikarito’s solo lives though. Coronavirus really sucks…