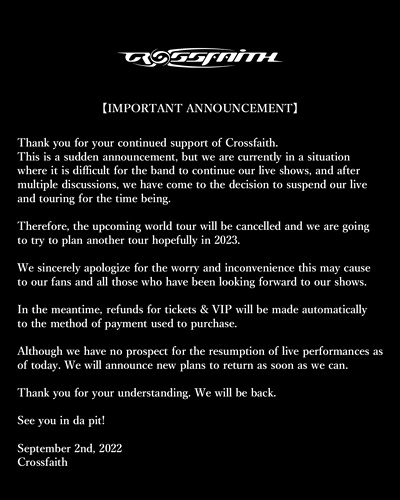 Anyone know what happened with them?

I spent a lot of money to come see them in Alabama for Furnace Fest so was really dissapointed about these news.

Zero idea what happened but i can dig on 5ch if i get to it. Maybe they know something we don’t know.

I’m guessing here, but this sounds a lot like they’re having trouble getting what they need.

Out of the four levels of travel advisory, Japan is the second highest purely because of COVID-19. I don’t know the situation there at all, but I would guess that it’s majorly inconvenient right now to get in and out of the country. I did some brief searches and it seems like Japan is making some moves to reopen next month. Perhaps that’s why they pushed it off? There are probably other factors too.

On 5ch there is a lot of talk about money and the suspicion that they didnt sell enough tickets.
@JohnN made me aware of the fact, that its not just the tour they cancelled, but all live activities. Which, if you ask me, smells a lot after internal trouble between the members.

Another issue of course could be if someone has health issues, is sick, but here is the question, why the wouldnt say it then?

Well, except for the covid pretext, all I know is that tour logistics (especially transport) have seen their costs double to triple. Ofc, tickets presales ain’t what they was years ago, and a large part of world or EU tour has been canceled in the previous 6 months for many bands bigger than them due to this indicator. Though that doesn’t explain why they suspended all live activities in Japan.

Yeah it would be weird of them to cancel the shows in Japan too if it was for money. They first cancelled the latin america dates which i can understand if it was for not selling enough tickets. I think the US dates were all festival shows so they wouldnt get much out of those either. Furnace Fest put them on as the opening band of the first day.

All of the members have completely stopped posting on twitter after that announcement. So this does seems more likely to be internal trouble with members/management?

Kenta was the only one to address a rumor to say he wasnt arrested? 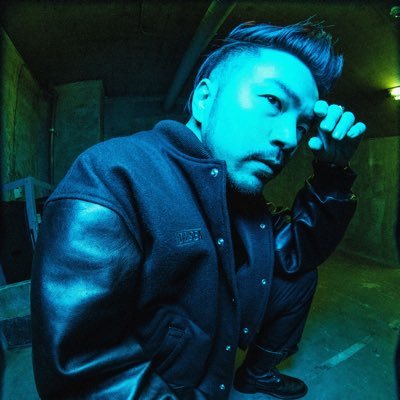 Kenta was the only one to address a rumor to say he wasnt arrested?

5ch was discussing if he had been arrested, not sure if those rumors where on twitter too

i just noticed crossfaith isn’t being followed by one ok rock main twitter account. Nor is my first story which ya think they would follow since it’s Taka’s baby brother’s band.

Could be a management thing

The one remaining gig this year I had tickets for… oh well.

Hope they can get things sorted out, whatever their issues might be.

Rising costs, staff shortage in Europe (=uncertainty) and low ticket sales for recent tours/concerts. At least in Europe, many tours have been canceled or concerts moved to smaller venues due to low ticket sales. If you’re not Machine gun kelly or My chemical romance of course. Smaller bands definitely struggle with that a lot at the moment.

Ryo (Vo.) from Crystal Lake is leaving the band due to adjustment disorder. Oh my god that news hitted me like a punch in the face. This is so sad I can‘t even… I know he is not the founding singer of Crystal Lake but in my opinion he is the face of the latest succes they gained worldwide. It will be tough for „them“ (As I know there is only one original guitarist left) to find a replacement for Ryo. But they are trying and started a vocal audition.