DazzlingBAD 1st Anniversary ONEMAN LIVE DVD will be released at 2023/02/23.
It is a benefit that is obtained when buying the special ticket of the event (2nd anniversary ONEMAN). 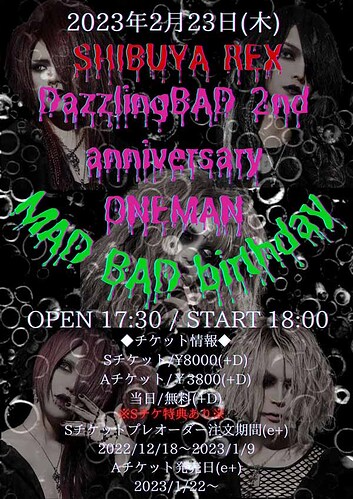 On November 26 they plan to release a preview of a new MV.

DazzlingBAD 1st Anniversary ONEMAN LIVE DVD will be released at 2022/02/23.

I’m sure people will rip it and put it up on Mercari almost immediately.

imagine releasing a live-limited dvd to your mostly overseas fanbase

So this is one of those vk bands who’s way bigger outside of Japan rather than their own country? Better call Ganshin and set up a euro tour. I’m assuming Europe and not the states based off of history.

Like, 99% of no name bands are so. I saw gaijins at their liveshows, and I’m sure it’s because they like vocalist appearance (I think their fan base was built around that “cult”)

No, they have an okay Japanese fanbase also.

And seems only fans going to that gig and buying the special ticket can get it.
So only less fans will be able to get it and ticket is 8000yen. Who knows their stans will sell it for double.

Gotta find people desperate enough to pay $100+ for a dvd to even break even.

this sell strategy gives such a sukekiyo vibe.
makes me want to call them “Sukekiyo at home”

Except they haven’t garnered the price tags that sukekiyo have.

The video and audio quality definitely makes up for the fact that it’s just a benefit, and it’s great. Surely they will be generous with the songs it contains. Crucifixion/ La’veil MizeriA used to do this with their 10000 yen tickets, an ugly DVD that was no longer than 10 minutes. And it was great too.

Crucifixion/ La’veil MizeriA used to do this with their 10000 yen tickets, an ugly DVD that was no longer than 10 minutes. And it was great too.

But… it’s obvious scumming… I used to enjoy both of them, but it’s hard to enjoy bands who uses their fans as unlimited wallets.

have gigged with them but did not watch their rehearsal, is like all the choruses/clean parts just him depending on the backing track to do all the work like in that trailer? @_@;

I think it’s just my point of view as a person who experienced financial abuse and physical violence.