I’m getting back into watching more scary movies and noticed there was a hole for discussing horror films. So I’m resurrecting this classic MH thread

I recently watched The Medium, a Thai horror film about the story of a shaman’s spiritual inheritance. Someone in her family starts to show signs of getting possessed by their god, however, it looks to be something else. It’s filmed in a documentary found-footage style.

It was released this year and was directed by the guy who did Shutter (Banjong Pisanthanakun) and co-written by the person who directed and wrote The Wailing (Na Hong-jin) which I have yet to see.

Thoughts:
I thought this was quite good. Not really scary and is a slow burn to start, but when the climax of the film hit, it stuck with me. It doesn’t really do anything new with a possession story, but the flavor of it was new to me and made for some genuinely unsettling moments. It gets really dark and the third act pulls no punches. Although there was still some characters not acting in the smartest way, the acting is really great all around and believable.

I want to praise Narilya Gulmongkolpech specifically for her excellent performance and really selling her character. It was apparently her first role on the big screen as well (between this and Squid Game’s HoYeon Jung, I’m seeing a pattern here with amazing first performances). You see this reflected in the trailer so I don’t consider it a spoiler, but when her character in the movie begins to transform, it really did disturb me. Her movements especially made my skin crawl and she had apparently done some weight gain/loss to prepare for the role. It really paid off and made those scenes more effective.

I’m not a particularly big fan of found footage films, but I found that they did a pretty good job with filming on this one. Not too many crazy shaky moments and they kept gimmicks to a minimum. In a lot of ways, it felt more like a traditional movie rather than a found footage film. And I think part of that had to do with the excellent video quality. Since they were going for a more high production documentary, it didn’t have that recorded-on-a-phone feeling.

Overall, I really enjoyed The Medium and am still thinking about it days later. Paranormal Activity eat your heart out. 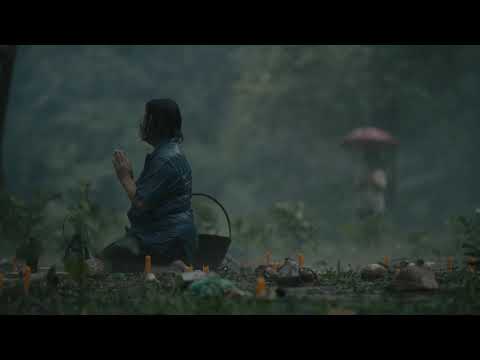 Just finished watching Midnight Mass, what a show! I’ve been craving some good thoughtful new horror series, and this one delivered on all fronts. Great characters, cool mysterious atmosphere and an interesting premise/background that makes you think. Oh, and bonus points for the lack of idiotic jump scares. To me it might be on par with The Haunting of Hill House from the same director. Recommended!

Hill House you say??? Loved that show and really liked Bly. Will have to check that out!

I have been rewatching Midnight Mass recently. I was blown away in the first viewing. It had a lot of themes that I connect with as a former catholic and now atheist. The angel part was on point too, I kinda wish there was a VK band that delved into that theme. My only gripe about it is that it is very wordy. Lots of dialogue … but also lots of great performances.

@nxsm Looks pretty good! It appears it might be tricky to track down so I’ll have to see if I can find it. Any idea where one might be able to watch it?

Well, get cozy and stay awhile!

I watched Terrified (AKA Atterados) a couple nights ago. It’s a 2017 film from Argentina. I heard so many people praising it and saying how scary it was so had some high expectations. Sadly, I don’t think it lived up to the hype.

It was a typical paranormal investigation story (which isn’t bad in itself) but it just kind of meandered and it wasn’t clear to me what exactly the point of everything was. There were some pretty great and memorable moments, but I didn’t really find the movie scary and none of it really came together. The characters, allbeit underdeveloped, were well acted and brought some color into the film. I think with a solid plot and more character development it actually could have been a new age classic.

There’s apparently a remake directed by Guillermo Del Toro in the works so that should be interesting.

I’ll tell you something very cool. Or, let me rephrase that; for my band it’s very cool. See, we’re this band who make songs about movies (horror, action, exploitation) and we are not big or popular or anything like that. Super small band no-one’s heard about. But yesterday my band received a mail from a really cool production company (that we’re already fans of) that just bought the license to release one of the movies we have made a song about on blu-ray, and they were wondering if they could make a video to our song and include on the official blu-ray of the movie. Just take fitting footage from the film and shit.

What will we gain from that (if it happens of course)? Nothing. But being massive fans of the movie, we thought that was really fucking awesome and said yes. We won’t earn anything from it, we won’t get many new fans because of it or something like that. It’s just really fucking cool for us as complete movie nerds. It’s no official yet, but hopefully it’ll happen. Would be so rad.

That’s today’s story. Other than that I will be watching Ben Wheatley’s new movie “In the Earth” tonight, and I am really looking forward to it. I haven’t seen all his movies, but “Kill List” and “A Field in England” are modern folk-horror classics, the latter being one big fat acid trip, “Free Fire” was a Tarantino-esque movie that’s among the best Tarantino-clones there is and “High-Rise” was a fun and thrilling black comedy that goes out of control. Sightseers however I thought was bad. But I am looking forward to “In the Earth”. Heard some really good thing about it. Should be fun.

In the Earth - Ben Wheatley is the kind of guy who just does whatever the fuck he wants, and this is that. Not his weirdest movie so far, but still pretty trippy and contains much of what Ben Wheatley has become known for so far. It’s bleak, mysterious and highly atmospheric, and at times darkly humourus. It’s also nice to see him go for a folk-horror inspired movie again. He’s at his absolute best when he dives into the world of folk-horror. 8/10

Last Night in Soho - Another highly stylized movie by Edgar Wright, and this time it’s a psychological horror movie. Well, what can I say about this one? It’s gorgeous to look at, it’s got a interesting concept and is well-acted, but it suffers from being about 20 minutes too long, and the first half of the movie drags on a bit. It also suffers from being way, way, way too predictable. I am not one to mind movies being predictable, but it’s so obvious that he’s trying to make something very unpredictable and that’s ultimately where the movie fails. And don’t get that last sentence wrong, it’s not a bad movie by any means. I was well entertained. 7/10

So happy to hear someone shout out this movie, I bring it up as often as I can <3

I’m not too familiar with the nuance of “folk-horror”, but it sounds like horror films within a forest/old-timey setting. If so, I love movies like that and this sounds right up my alley. Are there any movies you would compare this too?

It can be that, but doesn’t have to. Folk-horror is basically a subgenre based around folklore, and even though some are supernatural and include monsters and whatnot, and the horror itself usually stems from human beliefs and their action. Rural settings and themes of nature and pagan beliefs are very common.

The classics:
The Wicker Man
Witchfinder General
Blood on Satan’s Claw
The Devil Rides Out
The Blair Witch Project
Night of the Demon
Cry of the Banshee
The Lair of the White Worm

Newer ones:
Midsommar
A Field in England
Kill List
The Witch
Gretel & Hansel
The Wailing
The Ritual
Black Death
Apostle

As for what you are asking for, The Ritual, Gretel & Hansel and The Witch should be exactly that.

Nice, thanks for the insight. I really enjoyed Midsommar and the Blair Witch Project. I actually quite enjoyed The Ritual too. Will have to keep these in mind for the future.

Antrum: The Deadliest Film Ever Made - I read about this and was instantly interested as I love these type of movies. Antrum is a mocumentary about a movie that is said to make people who watch it die, which is a very interesting concept. So I expected this to be like a mix of John Carpenter’s Cigarette Burns and La rage du Démon. And it was, just it wasn’t as good as either. Antrum starts off with a few interviews before it shows the entire existing movie, and then ends with a few interviews. The interviews isn’t as good as La rage du Demon and the movie itself isn’t nearly as good as John Carpenter’s Cigarette Burns. Sadly, because the potential was here. The “lost movie” from the 70’s however does look very, very good and real, and I love a lot of the occult imagery through the film, but the story just doesn’t hold up. Pacing felt very off too. 6,5/10

I highly recommend John Carpenter’s Cigarette Burns and La rage du Démon btw. Especially the latter. It’s a documentary about a fake film, and it’s so fucking good. An absolute masterpiece of filmmaking.

The Blair Witch Project should never be seen without also watching the accompanying promotional mockumentary entitled Curse of the Blair Witch.
The film itself is just some students running around in the woods. We don’t see anything and nothing is explained. However, Curse… goes deep into the lore (and is canon with the first film).
Years ago, I sat down with a friend to watch them both, and he couldn’t get through that mockumentary. Apparently it was too scary.

Will have to try that, never knew it existed.

Speaking of mockumentaries, I completed the Hell House trilogy. It was cool for the most part, story can be disjointed but the twists scares are too fun. Lots of things on the background so you definitely had to keep an eye out for all scenes.

Before that, watched Gonjiam, Paranormal Activity: Next of Kin and One Cut of the Dead. I have been doing at least 1 mockumentary a week since Halloween season lol.

Gonjiam definitely lived up to the fun fright.

New paranormal activity I think is pretty good monster movie. Especially with how it evolved into it during the movie.

One cut of the dead is all kinds of brilliant.

I watched the first Hell House and thought it was entertaining. I think fun is a good way to put it. I wasn’t scared or anything, but there were a lot of fun and tense moments.

I also really enjoyed Gonjiam. I feel like they nailed the atmosphere of dread and malevolence. I was pretty creeped out.