Japanese Proxies: Who to Use, Who to Avoid

This thread is for all members to share any experience and knowledge using different proxies to ship items internationally from Japan. Here we will share some basic information and maybe some less basic information. I’ll start.

I buy a lot of stuff off Mercari, which is an awesome secondhand auction site. Buyee is the shopping service that works with Mercari to ship items internationally. Their website is in very good English and in general, I find the directions clear to follow. I recommend them. The one tip I have is to pay attention to the shipping fees. Right now, they’re about $25 from Japan to USA using EMS. There’s a set of three green buttons near the top of the form when placing the order from Buyee warehouse to you that allows for package consolidation, extra protection, or both.

If you are buying more than one item, I almost always suggest package consolidation. The fee sucks, but the fee is less than paying shipping individually for each item. I chose package protection for my latest shipment because I bought six CDs; it cost $15 and they sent an insane amount of bubble wrap. I got what I paid for haha.

One other misconception that I wanna clear up too is that Buyee will put protective packaging on your items for you. That is not true. Whoever sends the item to Buyee is the one who determines how much protective packaging gets put on your order. If you don’t specify anything special, Buyee will send it to you as-is. I’m getting this information after using their service to send various things to me over several months, and noticing that there is absolutely no consistency in the quality or levels of protection. That makes me think it’s not Buyee that’s doing it.

I also heartily recommend Treasure Japan. They work fast, also have great English, send packages to you in a timely fashion, and they even helped me avoid a scam! 12/10 amazing service.

Are Treasure Japan more expensive than Buyee? Do they cover everything that Buyee does like yahoo and mercari?

Using their estimation tools, TJ is a touch more expensive. Also, this doesn’t take into account other fees depending on the shopping service (this happened w/ HARD OFF.) This was my best/worst kept secret b/c the main advantage to TJ is there is no region-blocking/limitation. TJ will purchase from anywhere, where I would typically get blocked with FromJapan, etc.

. She sends postcards for New Years too!

I use Buyee for Mercari and Yahoo Auctions and FromJapan for webshop orders.

I have a question about Buyee though, I had an order canceled by the seller but I don’t see the refund to my credit card. I also bought a few other things, so I’m wondering if they used the money from the canceled order towards the others that I bought. I may have gotten a little greedy so it’s a little hard to align what is what when I review transactions on my card vs the site. I had some refunds from them but I don’t see this specific order refunded.

I don’t think I’ve ever done protective packaging but I will warn you, if you consolidate a package and then consolidate it again with something else. They will just take the first consolidated packaged and just put it in an even bigger box. I had a friend that wanted something off Mercari and since I had that shipment pending I thought I could just consolidate their order with my shipment and shipping jumped to almost $200. This was during peak pandemic and with DHL so I just ate the costs but I wish they had warned me.

FromJapan was helpful when a webshop forgot to send me my bonus. They were also very helpful when they forgot to put my zipcode on the package and was able to update my address with FedEx. However I had just moved and transposed my new zip code so that was a whole other mess I caused but I still got the package after a buncha phone calls.

I use Buyee for yahoo and Mercari and use CDJapan for websites.

This was my best/worst kept secret b/c the main advantage to TJ is there is no region-blocking/limitation. TJ will purchase from anywhere, where I would typically get blocked with FromJapan, etc.

Where exactly would they not purchase from?

FromJapan has blocked purchases a few times from Mercari and Yahoo Auctions due to either the seller’s request in the item description or the seller having their items blacklisted entirely. I’m not sure about the current state of FJ, but they’ve outright blocked Mercari before.

Here’s a good explanation I’ve found from someone else:

“I’ve heard some sellers don’t like foreigners buying their items for various reasons so they opt to only sell domestically. Additionally, some sellers will cancel orders if they know a proxy is ordering for someone so sometimes even large proxy services like FromJapan aren’t an option either. Smaller proxies tend to use accounts that seem like real people and don’t advertise that they’re a proxy which bypasses this. Personally, I use Treasure Japan whenever I run into this issue as a double layer of protection to bypass the “only available in Japan” thing and it’s a small proxy that can get past sellers who usually cancel proxy orders.”

Wow that’s crazy, had no idea they’d fuck over anything they think is going to be shipped out of Japan, just knew that most don’t ship overseas; crazy.

I’ve never experienced it myself, at least as far as I’m aware. Like I don’t think the order I recently had canceled was because I’m a foreigner using a proxy service but I know it happens.

I mostly only heard about it when it came to name brand clothing, my friend that spent some time overseas says the second hand market for brand clothing is sorta a community type thing. She said there’s a joke that like, everyone is just wearing the same designer shoes, purse, scarf etc because it’s the same people buying and reselling the same item over and over. So when you sell to foreigners the brand item is basically leaving that resell circle. Maybe someone else can explain it better as this is just what I heard second hand.

Anyway, I actually gotten gifts with some of my mercari purchases with little thank you notes that make me smile.

I’ve used Buyee many times and I’m mostly happy with them. They tend to ship quickly and I’ve never had anything come in damaged. I do pay the consolidation fee, but I’ve never opted for the added protection.

My one question for anyone else who has used them though - have you ever had one of their shipments get lost in the mail and if so did you get any of your money back? I have been waiting for a package that was mailed on 12/31. I’m 100% positive that it’s lost for good and I will never receive it. I have been going around and around with Buyee about it. They want me to keep finding out from my post office and US customs where the package is. Supposedly Buyee went to Japan Post and had them look into it too, who stated it’s in US customs all this time. I don’t know if I’m going to see any of my money back from them for the items lost and for the shipping cost. I don’t remember seeing any option for insurance, I thought it was just automatically added to the fees.

Are they doing Mail-Order aswell? Or do I have to search a Shopping Service dir it ?

So, I’ve been looking for a piece of merch for 5 years now and it never showed up online. I recently checked mercari and Yahoo auctions and finally found it (even in my size and unused) on Mercari.

I ordered via Buyee (no bidding) and was confused because after 3 days my order wasn’t even “confirmed”. Now it got cancelled and told me to ask the support for more information, which I did. 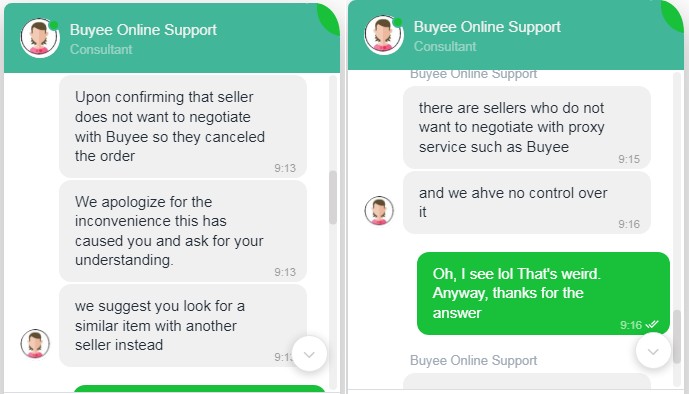 Has this ever happened to anyone else? What’s the reason for the seller not wanting to sell to proxies?

I’m trying to order over white rabbit express or sendico now, but probably the same thing will happen lol

You might have to find a friend in Japan to buy it for you unfortunately. I don’t understand it, you’d think if you’re selling something it shouldn’t matter who buys it as long as they pay the price but I’ve noticed several Japanese sellers refusing to sell to foreigners and even though the proxy might be Japanese if they find out they’re buying it for a foreigner they’ll refuse to sell to them as well. It’s just shitty imo but maybe there’s more to it than what I’m aware of.

I do, but I don’t want to constantly annoy them with new mercari purchases

Also since I’m from Europe, mercari is a better option atm because they offer shipping with DHL express which is the only way to receive packages atm besides SAL.
A friend said that buyee often comments on the article first with a huge ass message explaining what they do and who they are and that they’re shipping it overseas asking if that’s fine. Maybe this scared them away.
I don’t really get it either though, there’s no logical reason at least…

because Japanese music fans just hate forgeiners because they don’t like people share stuff to the internet without any pardon.

but that it is even with goods

I see no problem, I don’t really care who buy my stuff, buyee or someone else. Maybe the reason is they don’t want to be bothered with problems like reselling or buyee can cancel the order because the customer wanted to cancel it and cancellation process is a bit mendokusai…

Try treasure-japan. As much as I heard they are small and aren’t really affected by it

Same, I wouldn’t care either. They don’t have any risk because they get the money in advance anyway lol

Thank you! I tried Japonicamarket now because someone said they don’t appear as a Proxy shipping service when you buy something!