Vizard visual kei tarot card project “CARTOROMANCY” has formed back in November and will be released as an art book (100 pgs, A4) and a tarot card set (22 cards) on 1/15. Costumes were designed by Mana’s brand Moi meme Moitie. For the promotional videos featuring the artists in their costumes, check out their twitter and Instagram. 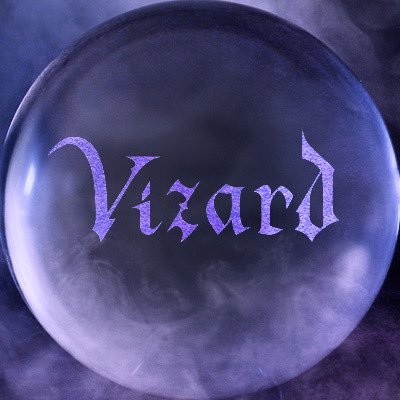 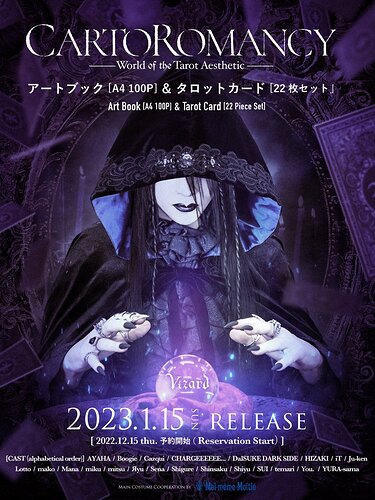 I wonder how expensive this gonna be, but might interesting to get?

The only thing I don’t always like is the edit photoshop skills of Lestat C＆M Project. Usually great photos but the faces of most bandman are way to over edited. Hope this project doesn’t look too over edited.

Getting this even if it’s $200 because my witchy SO would love it, as a Mana fan, as a Moi meme Moitie fan and as a fan of tarot (although this is an oracle set technically since it has 22).

For some reason I thought this would be some lame mobile app thing, but it’s an actual physical photobook and card set. That’s pretty cool!

of course you are, queen orz

it’s so great to see this, and I hope he won’t stop at one project. I’m glad this is replacing the defunct vk magazines on some level too.

Didn’t immediately recognize Mana sama on the picture but I can see by the lips lol
I wonder what VK will come up with next.

And if so? is that so wrong?
Can’t do foreigners start a good project with visual kei bandman?

This seems like a such a cool concept. Never seen this before, so I’m quite excited to see how it turns out!

one of the makeup artists is a foreigner :^)

No, the makeup artist is Japanese.

sorry, pretty sure Michele Berry sounds like a white lady to me xD

Thought so too, but if you check the twitter (photos) you notice it’s a Japanese person.

Or maybe Chinese? well at least asian.
At least you see the same woman on various photos back next to people who got their hair/makeup done.

Anyway, this idea is pretty unique and hasn’t really been done before, has it? I think it’s nice that Mana put mainly newcomers (and a few more well known guys) on these cards, it really shows that he wants to support the newer generation of artists. That’s cool, even if you might not like certain bandmembers, lol.

However I am still disappointed that all big projects Mana was involved in the last years were anything but a new Moi dix Mois album… at least that tarot card deck isn’t as cringe as Yoshiki’s merch, but still, give me the new album. 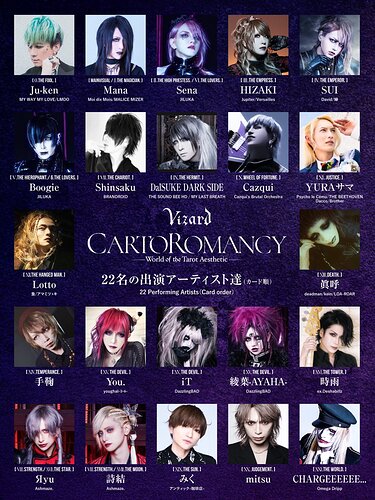 Don’t know everyone from the list but some of the nominations were pretty on point… Mako, Miku and Hizaki totally fit their roles

Though not sure why there are two versions for some of the cards. Really curious to see the actual deck…