I made an account here because I was interested about Akane. The music that D.I.D made has left a lasting impression. Does anyone know anything about him? Also, what is he doing today? (Please and thank you.)

All information is appreciated

Last I heard he was talking about yearning to get back to singing. I do think about him from time to time.

He is now a man of god

I miss him and I always hoped seeing him in a new band or a restarted D.I.D., but I doubt he will return…

I was always impressed with his vocal capabilities so a comeback would be nice. I wonder what his lyrics would be about if he really has become religous.

Judging from what i can remember, he found God when D.I.D returned with Fatal Error Race/W.O.D.II. The lyrics from those inside of me songs weren’t things far off from what’d you’d read in a D.I.D. booklet, they also still played stuff like atheism while they were still going with retsu so idk. I feel likr besides now excluding “god is dead” and things of the like, it’ll still be more or less the same. He has a protected twitter but sadly he hasn’t posted since 2020…Whatever he’s doing though, i hope he is well. Part of me feels like he’s silently retired and to a degree…I kinda understand…maybe he feels like he has more of a overseas audience because when you think about it, D.I.D. wasnt as popular as para:noir or even that popular at all in Japan’s vk scene, despite being on a sony label. They were good, that much is undeniable but what image would he go for? I feel like he realizes that to a degree, I want him to come back but I feel like he’s retired. But then again he posted this tweet so idk… 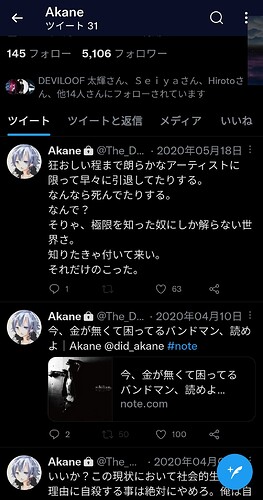 “Only artists who are maddeningly cheerful retire early. I’m going to die. why? Well, it’s a world that only those who know the limits can understand. Come with me if you want to know. That’s it.”

I have no idea what he means by any of this, I just hope he’s okay.

Japanese christians in the 21st century are pretty rare.

Thank you for sharing.

I never really thought about it, but you’re right.

Why not this god?
One percent of Japanese consider themselves Christians, religious labels aren’t exactly a thing in Japan so the amount of Satanists and everything else is probably higher than the numbers entail; there’s plenty of Japanese muslims after all. I really would love to know if Yasuyuki from Abigail is an actual satanist.

That explains “Gott ist DA” for me.
Never thought he would settle his twisted relationship with his religion. He was so full of hate after his father died on christmas eve, when I remember right. It’s so long ago that I’m not 100% sure about that.

So much lore I never knew about is being revealed. It’s fascinating. Is that what brought him to Nihilism in the first place? (Also is it the inspiration for the song Dec 24th?)

I recommend also reading this. This note he left is weird to me:
今、金が無くて困ってるバンドマン、読めよ｜Akane｜note

Thank you for sharing. I cannot read Japanese so I had to google translate it, but from the bits that I could piece together, he seemed to be addressing bandmen from the generations before his. It looked like he was calling them out for being selfish/posers. (I wouldn’t be suprised if I was wrong though, it’s just my best take on it.)

But now that arouses a question. Were these older bandmen headhunting him? And if so, why?

Use this its most accurate
https://www.romajidesu.com/translator

He’s writing the message to older band men. Saying that they should quit vkei.

Oh… I see… I wonder why though? (Thank you for your help.