As he said, ‘I am nonsense for honma’ (and his tries to be cool speaking in osaka dialect makes it even prettier （笑） 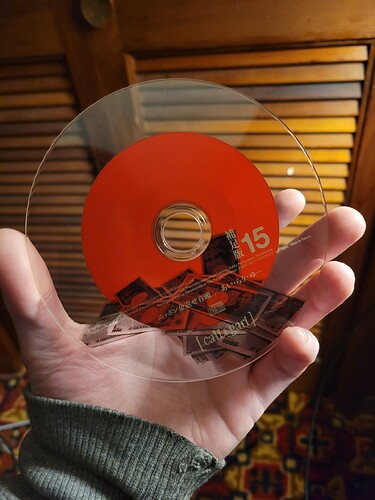 Ripping some CDs I just got - this disc is so weird but I love it. A mini-CD, except not?

Looks like the boys are dropping a live-exclusive single about Kyoto for their Kyoto show in April. I was wondering the other day what their next release would be, and I guess this is pretty in-character for them. Maybe a couple of them will pop up on Mercari

Oh yeah, they’re also releasing one of their huge-ass DVD boxes too!

Features two live performances at LINE CUBE SHIBUYA, one on 2021/02/11, the other on 12/04, plus extra live CD and other bells and whistles.

I haven’t had a chance to sit down and watch the DVDs, but Disc 4 actually contains MP3s of the entire collection, which I think is absolutely awesome. Really cool bonus.

My personal highlights so far are two of the random digest tracks they included: a performance of Haikei=BGM, and an acoustic version of Blue Film. Just excellent. The concept for 15 was something like “energetic and powerful,” and that’s definitely coming across in their live stuff. I don’t know how they still pull it off after so long.

The bonus single is quite nice too. Spacey and dancey.

Kenjiro just announced that he’ll be rereleasing his solo album MAG-NET from almost 20 years ago next summer. Included is a new song featuring Shuuji.

Anyone know the significance of the album artwork on their numbered releases? They all seem to follow a theme, especially when there are multiple versions. Without looking too deeply into the lyrics, some are kind of easy to figure out, like the umbrella on Dai 3 (Tsumetai Ame) or the megaphone on Dai 4 (Siren).

But sometimes I wonder if there’s any significance beyond “it looks cool”.

Hmm so this question made me dive into my CD booklets and take a look around.

I don’t own Dai 1, and can’t really tell what’s on the cover. A leaf??? Literally no idea on that one. I thought maybe it was a flower, which could connect to the songs with romance-centered lyrics, but it looks more like a leaf.

Dai 2 is a fan - I’ve always assumed that this was chosen with the logic that fan blades could theoretically stand in for a guillotine? That’s my best guess. It also works in the context of Natsu No Hi’s summer theme - but that wasn’t originally on the album.

Dai 5 is the posable drawing model doll thing. If there’s an explanation in the lyrics, I think it would be in Yuganda Kagami? There’s lines about being someone’s toy/sex doll, so that lines up. The graphic design of the booklet is like an instruction manual, it looks like graphing paper; I believe the Dai 5 preview included some sort of paper/cardboard model you could assemble, which lines up with that general theme. So…models. Arts and crafts. The Yuganda Kagami lyrics might be in keeping with this, but I’m not sure how tenuous a connection I’m making there. I think it does make sense - putting my literature hat on, the posable model in the context of their music does seem like it would be referring to being used in a dehumanizing sort of manner.

I actually came up with a question of my own looking through the Dai 6 booklet - there’s a weird box truck logo between the album and Compact Disc logos, with the text “CLEAN ROOM LAB •AO SAKURAI•” on the box of the truck. Anyone know what on earth this is? Was this Ao’s design company or something? I was reminded while looking through the booklets that he does most of their art direction and design.

Also the lyrics for 3S/Michi wa Road are omitted “due to the intention of the artist” so? That’s fun. I know it’s a parody track or something, and the band they’re parodying is credited on the track. I feel like so much context is needed to have a grasp on that song.

Anyhow, Dai 6 is the fridge. Perhaps this time, the doors at the beginning and end of the album are actually just Ao getting a leftover half-sandwich. It’s a very yellow package, and yellow is referenced in Galaxy so ??? Maybe. According to my extensive research, refrigerators are, in fact, not made out of Cobalt, so that option is out the window. Now, we know that the connotation of a refrigerator for most people is one of domesticity. The last two tracks on the album both deal with domestic themes, so there’s that. Lucky for us - unless my translator has failed me - Tadaima actually explicitly references a fridge!! Boy was that a relief. There are references to shopping with the departed partner within the song, and the part that references Fridge-sama notes that the near-empty contents of the fridge must be for him alone, rather than him and the partner who is no longer there. To seal it, the back cover of Dai 6 has the door open, with the inside being empty. Bull’s eye on this one. If we wanna speculate on potential thematic connotation, I would look towards the contradiction of loneliness against a domestic symbol, which would typically indicate “home,” comfort.

Let’s talk about toilets now. I felt like I had a bit of a lead with Dai 7 - the album cover has a toilet on it, and the Dai 7 Preview single has a urinal! This narrows our search, maybe. I turned to the Maguro lyrics, and found a few possibilities. The first verse references vomiting and Soaplands. The former is less of a stretch that the latter - I don’t know what Soaplands typically look like, but I imagine they wouldn’t quite resemble either cover. Still, they’re seedy-looking toilets, which lines up with the connotations of prostitution. Also within the song, the Maguro gets spun and spun and spun by the monotonous grind of daily life, and what does the water do when you flush a toilet? It spins. Checkmate. Beyond that, though, I think it might have just been chosen due to its cohesion with Cali Gari’s Eroguro style - it’s a perverse, seedy-looking cover, and it makes as much sense as anything for their major-label debut. Perhaps the B-side from the preview single has a more toilet-adjacent reference, but there isn’t a lyric booklet as far as I know.

Somebody who is better at navigating Japanese could maybe give a better answer for 8, I’m really not sure. “Cali Gari hangs it up,” maybe? Cali Gari does the laundry. The booklet art is laundry-themed, featuring the boys hanging the “8 -We Appreciate the works called JIKKENSHITSU-” shirts on clotheslines - and the last page of the booklet is the shirts blowing away in the wind. I’m not 100% sure if they knew they were going on hiatus after 8 - but if they did, this imagery makes sense. Beyond that, I didn’t find many clues, so I’m going with the album aesthetic being meant as a tribute/goodbye. By this point I was getting tired, so I didn’t pore over all of the lyrics. I might return to this another day.

Dai 1 is definitely a leaf. I was thinking mint, but apparently I forgot what a mint leaf looks like. Do we have any botanists in the community?

10 is interesting too. The limited edition has exercise equipment all over it, but I have no idea what the folding thing on the cover is. And the rebuild cover is a crosswalk, so… School Zone? 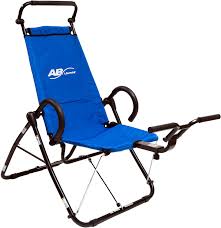 ?? The proportions are different, the one on 10 is symmetrical. Would it still function as an ab cruncher? Is it only symmetrical because the rest of the cover for standard 10 is pretty much symmetrical? All that said, I couldn’t find any reference to exercise equipment in 10’s lyrics so idk. I’m going to try to look into that specific piece of equipment, but no luck so far.

11’s teddy bear is name-dropped in その斜陽、あるいはエロチカ and I found the explanation in this interview with Ao. It sounds like this theming was pretty slapdash, which is funny.

Whatever it is, it’s a real object because Shuuji is sitting in it here. 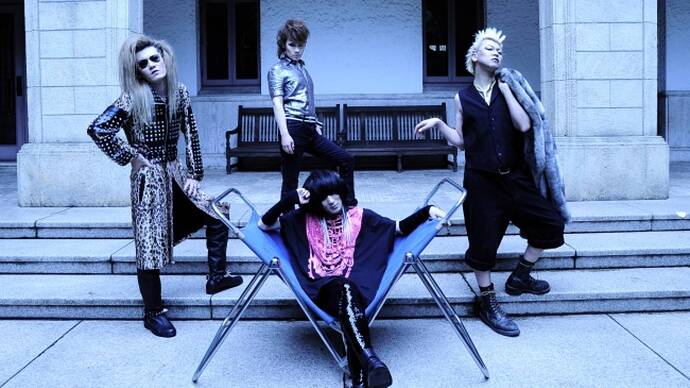 They’re all sitting in them in the booklet, the photoshoot is pretty much centered around that piece of equipment. The brand logo looks like it says “Styly?” But I can’t tell for sure, and I wasn’t able to find anything from Styly.

tbh I never gave much thought about the cover designs, I just thought to myself “that’s what they usually do, little objects and stuff”, but interesting theories here!

One thing that popped into my head reading through all of this is how Dai6 has a fridge on the cover and the CD case itself is kinda boxy and thick, similar to a refrigerator (I guess, kinda?).

Hmmmmm what is this?

Shuuji is my creepin’ cryptid prince.

Some newly uploaded live footage from our jazzy bois:

Sitting gari is so dignified