Yoshiki and the Queen of England
If you scroll through the “Where in the World is Yoshiki?” thread you can find high likley infos on that photo

Sutari of Sacrifice is extremely fluent.

But he got my respect for trying to communicate

Gil is demanding video proof XD
and with that we dont mean musicvideos with english lyrics, because yes there are artists with complete english lyrics who get help from outside to write and sing them

So basically any band that uses mainly english lyrics has at least one person proficent enough to speak english on a conversational level at least.

id like to correct my own statement here, because yeah, i have unfortunatly come across bands who cant talk english and get help from outside, so its questionable for those bands if they have any members that are on a conversational level or not
To name two bands that work like this there are See You Smile and Victim of Deception
They both are crediting someone for the translation of their lyrics.

Also i think we should differentiate between written english and talked english. Some bandmembers might be able to write in english, but the talked one will be on HARO and SANKYOU level (referencing to @gilnyangi made up talk level on discord XDD)

RE: “proof” - Are recorded IG lives of them talking in English proof enough? All I’ve got beyond that is recording fails and first-hand accounts from sitting in on these lives and shows

Editing to say also, good point on writing vs talking. Pre-int’l success ONE OK ROCK was another example of this, IIRC. I had read in an interview (or some published thing, idk) long ago that Taka didn’t understand most of the English lyrics he sang, though idk if someone else wrote for the band or what. I don’t follow that closely.

Gackt has flawless English. Just check out this scene from Moon Child!

I wonder if any is fluent in other languages. I wanna hear mana talking in French.

There are quite a few mixed guys in vkei, I know Ryu from Ashmaze speaks English and Spanish fluently bc he’s mixed. Don’t think Subaru or Rio do… There are some Korean guys in the scene that I would imagine speak Korean, since there are loads of zainichi Koreans in Japan.

I feel horrible for saying this, but I CANNOT imagine a Japanese speaker being able to speak French well without like EXTENSIVE practice and immersion. The two languages have such different pronunciation, i just can’t see it going very well for poor mana-sama😅

Edit: look at how evey other language butchers French names/words

I recorded these for friends who would miss Natsu’s (Nocturnal Bloodlust’s drummer) lives and would forget that my screen was recording, so please excuse the pop-up keyboard/commenting interruptions if you’re viewing more than listening, BUT… here’s some videos of his 2019-2020 English. He was drinking during all of them, so ability to recall/respond was likely impaired, let alone in a 2nd language he was (is still?) studying:

Not sure if this has been covered yet, but Demon Kogure speaks near fluent English and has been interviewed in English as well. Here he is being interviewed by Jonathan Ross: 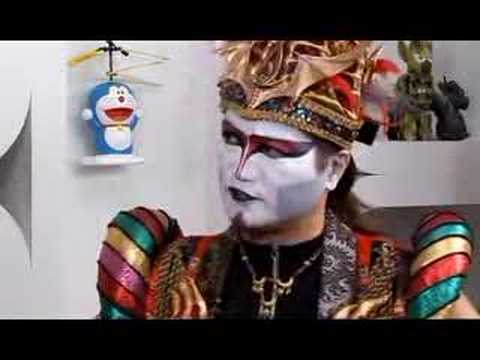 He was also interviewed by Larry King at some point in the 90’s, but the only full footage I could find was dubbed over in Japanese.

Shogo fluent? Not too sure
It might have been a while, but he mispronounced “Hanged man” pretty badly in a video.
Besides I still only understand half of his English lyrics at times.
“Ride on da cowboy just way u are” is also a tad wonky imo

maybe he can read English better than speak it? Like I can read Spanish 10 times better than I can if someone spitfire spoke it to me :o

Based on this interview, he is not even remotely close to fluent. He’s about conversational, sure, but fluent?

To be clear, my definition of fluent means that one has near-native levels of speech and understanding and could function in an advanced business or academic environment without difficulty.

Tomo from Echostream but that doesn’t count. He lives in NY (and doesn’t sing).