I hit my 1-year anniversary at the company I’m currently working for and my manager said employees get a small reward as a token of appreciation. She didn’t tell me what and to look out for an email.

I got the email and it turns out we get some points to use on a rewards site. I was thinking, “oh, that’s fun. Probably nothing really worthwhile, but the gesture is appreciated” Well, I go check it out, and wth at some of the items.

Utada Hikaru, Babymetal, and Animal Crossing LPs and upcoming video games and random collectors items from Iam8bit? These are the last things I’d expect companies to reward their employees. It’s not like we’re an international or entertainment company either. We’re a marketing company.

Thought I stumbled onto the freaking gamestop website or something. 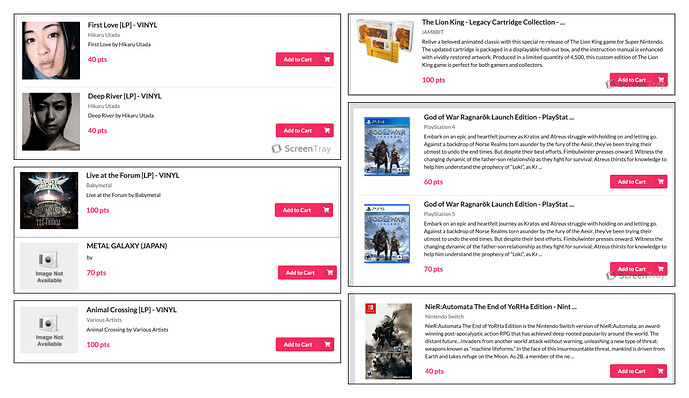 Noice. My company just does the whole gift-card thing for anniversaries/birthdays/etc., but that’s quite the interesting webshop. Your company’s age-range must skew more into the millennial territory. Either that, or your manager is based.

Proly the latter lol. I guess it’s possible there are lot of millennials working here. I haven’t really seen any of em though. Most people that I interact with (which isn’t a lot) are at least 1 generation above me. It just blows my mind that the place I prepare presentations and attend meetings is the same place I can preorder a switch copy of Nier Automata.

Officially, my most hated brand of people are neurologists. I hate sexist incels, political extremists and gangster apologists. But they do not come even close to neurologists…

Jesus Christ how come 9 outta 10 neurologists fucking suck. They literally have no idea of how their subject functions.

While we are at it my newest favorite curse is “I hope you end up neurologically sick” . It’s possible. It’s scary.

That bangyaru moment when bandoman is being nice with you (well… if making compliments every time we meet and sending pm in Twitter is something that I can understand as “being nice”?), and you can’t help but feeling like you’re falling in love

Isn’t it fun? I tried that for the first time last year at a farm. It’s the best feeling when you pick up a good cluster of potatoes. What kind of potatoes did you dig up? The farm I went to had golden yukon and red potatoes

I don’t know what kind they are but they were one of the early ones if I remember correctly. When you see the buckets full of small raund potatoes you feel like “yay I’m digging patatoes hehhehe and the buckets are fuuuuull”.

Yeah, seeing a full bucket of potatoes feels good. And they taste so much better fresh

Doing that all day does not sound fun. I only did it for like, 15min to fill up one bucket. From sun to sun down would be rough

It was just one hour for me, I was just helping some old villagers. But digging all day souds extreme to me, I’m lazy ass. I hope you didn’t lost interest in eating potatoes in the end.

Haha, it would take much more than that to make me lose interest in eating potatoes Ramen bowls are quite versatile. You can use them as intended for soupy meals, but can also work a fruit bowl, serving plate, using it to prepare bagels and found the seeds to not fall everywhere and instead funnels to the middle. Only need plates now for meals that require cutting but since I tend to prepare my meals in bitesize pieces I never need them nowadays.

I really want a cigarette

I wonder if you can rent a boyfriend in any other country but Japan. These guys can commercialize anything you could think of… Would at least try to practice on my conversation skills if I could afford it and did not embarrass myself. lmfao