What are you reading?

Could be anything from novels, to manga, and whatever in between. Currently for my weeb hobbies ive been binge reading a couple series since ive had the past week off. 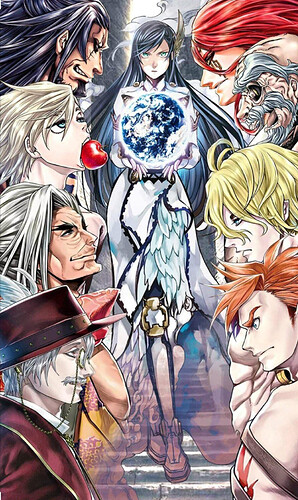 image946×1582 472 KB
First on my list is Record of Ragnarok (Shuumatsu no Valkyrie). Heard about this one since it recently got an announced to be getting an anime so i decided to check out the manga to see what im getting into. tl;dr humanity is hopeless so the gods of the world are debating whether or not to wipe out the entire planet until someone intervenes and suggests to give humanity a chance. Leads to a 1v1 styled tournament between gods and notable people of history (i dont want to give away who shows up but kind of think like the Fate franchise if youre familiar.) it sounds ridiculous and thats because it is but its honestly one of the most entertaining, over the top, battle stories ive read yet.

next notable series ive been reading is jagaaaaaaaaaaaaaaaaaaan. our main boy is tired of his job, tired of his relationship but then one day alien frogs start raining from the sky and start infecting humans and morphing them into “fractured humans”. very parasyte-esque but alot edgier and more morbid but still hella fun read.

Other manga im reading but im too lazy to write out descriptions for are Jujutsu kaisen (its amazing but you should really watch the anime), blue lock (pretty insane sports manga), dr. stone, gleipnir, and black butler.

as for more western stuff Ive been reading the Red Rising novels. some crazy ass scifi dystopia shit, good shit if you liked stories like Hunger Games or Game of Thrones but imo its way better than both (note i havent read book 5 of the series yet)

because of the annoying exam I’ll take about three months later, I have to read “Lunyu”, the ancient literature for thinkers, which was written thousands years ago.

the whole site is in Chinese, of course the original text is all in ancient Chinese, but there’s explanation below every sentense in case we can’t understand.

Reading Final Fantasy XV: The Dawn of the Future to see how this disaster ends

I know i should read it but after Episode Ardyn I can’t take any more XV stuff tbh. Like I had a second playthrough I was doing and everything but I dropped it because the ending made me feel mega guilty and I stopped lmao

I’m reading “If This Isn’t Nice, What Is?” by Kurt Vonnegut. It’s a collection of speeches he wrote for different Graduation ceremonies he attended. I’m only on the second chapter, but I’m enjoying it so far. Kurt Vonnegut is one of my favorite authors, so I really enjoy almost anything that he writes.

Recently got sucked back into the Shadowhunters universe and I picked up where I left off 5 years ago! I’m reading the third book of the main saga, City of Glass. I plan on reading the others (prequels/sequels included) by the end of spring~

As a “side book” I’m also reading Around the World in 80 Days…I love 19th century novels💜 I find them relaxing, dunno why lol

ah isnt shadowhunters in the timeline of The Mortal Instruments? i remember when i was much younger i was into the first book but i never read more of that but people would keep buying me random books from the series out of order lol

I gave up on The Black Tides of Heaven by JY Yang yesterday (just found it colossally dull), and I started The Island of Sea Women by Lisa See which I’m enjoying so far. It’s my third Lisa See novel in the past three months, so I’m feeling good about it!

I’ve been reading the manga Homunculus, great for anyone who got any interest in seinen manga. Also The First Law by Joe Abercrombie and A Magic of Twilight by S.L. Farrell.

about a month ago i read all of whats out for the Red Rising series. 100000000000% would recommend if you want some gnarly over the top dystopian scifi tho warning the 6th novel isnt out yet and its the planned final one.

the other week i read Six of Crows, kind of neat heist story with some fantasy twists but eh its hard to find the characters believable or relatable when theyre all teens tho the story seems to try to be adultish from time to time.

my current read if book 1 of the Stormlight Archive, The Way of the Kings. i heard the story does take a bit to get going which seems pretty appropriate considering the series is supposed to be like eventually 10 books long and the first one in the series is already over 1000 pages. im pretty invested in all the characters and all their stories and i cant wait to see how everything will eventually crossover.

ive started lions of al-rassan by guy gavriel kay but I think it’s going to take me forever to get through. I’ve also got the vegetarian by han kang on the go which is taking me way longer to get through than it should/than I would like. I’d like to read at least five books a month, but I’ll catch it up in the summer when I go escape the humidity.

Six of Crows and The Way of the Kings are some great fantasy books!

Missing 411 — Western United States & Canada: Unexplained Disappearances of North Americans that have never been solved | So basically rereading this makes me paranoid to go into the forest alone ever. @_@