Which disbandment/hiatus hit you the hardest?

D.I.D.'s Hiatus spiraling into eventual disbandment ruined me. I miss akane so much, i’d happily listen to him re-record his entire music career for the rest of my life it it means hearing those angelic ass high notes and those “HNRRRGNNNNNNNGNNNNNNNNGGGGGG” ass harsh vocals. I remember crying at work for a while when llll-Ligro- disbanded from the sheer disappointment. llll-Ligro- is just something that physically hurts, especially knowing Hinata was the main composer for the band, they had just returned and then just as quickly combusted spontaneously and blew up. One thing that separates Hinata and Akane though is there is some inkling of hope that he…and by he I mean Akane, will return one day. Hinata is just, well you know, no hope in that department. Gonna miss that buttery baritone voice of yours king. And Noulla…Dude it’s just not cool what happened to Noulla.

llll-Ligro for me too. It hurts extra hard when bands break up at their peak and the 3 songs they released just before breaking up were some of the best vk songs released at the time.
Kuroyuri to Kage and Rentrer En Soi had really good final releases that had me really wanting more.
Kagrra too. Isshi’s death shortly after made it extra sad as well.

And though I didn’t listen to them at the time, I really would have liked for Malice Mizer to have made one final album because their last few singles were really nice and I feel that Moi Dix Mois could never fill the hole they left

The hardest as in “I did not see it coming” where probably Girugamesh, Varyl and Grieva.
As for “Oh shit no” definitely Daisuke to kuro no injatachi because you know why…

I´ve also been missing D.I.D. alot but since we could see how hard they had it and how they just faded away without a real statement it didn´t hit me that hard. But yeah, whenever I listen to their songs I wish they´d come back.

AvelCain, mostly because it was a band that I was (am) emotionally attached to and feel like I’ve never gotten to properly enjoy them before the disband

There’s many, but I particularly remember being sad over Aicle since I really loved their craziness and chaotic music. They were quite unique and I still listen to them regularly. Oh, how I wish they were still around…

Megaromania and Lin hit me pretty hard too. And goddamn Nazare.

for me have to be gyakushuunojisakujienya , i love scarlett also but to see them end back in 2019 sucked i expected them to continue but ghey ended before pandemic happened …i big fan of gins vocals and the energy and fun they have while playing . unmatchable. songs and videos great i just cant explain enough but yeah sucks to see the band ended with just a thanks for support and form there no other posts of gin either 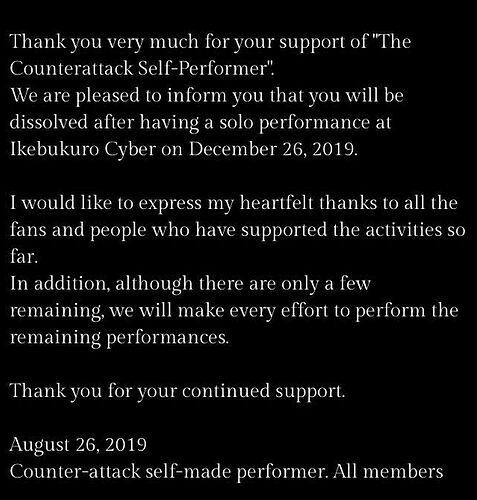 I’ve never been hurt by a disbandment until GOSSIP announced theirs ((but we all had a feeling they’d return, yet at the same time…)). I bawled like a baby TWICE at their last two day live. And it’s so rare for me to cry. Ooof.

Then the bastards came back months later as NICOLAS

((big rip to them again. because i miss gossip so damn much. Nicolas is nice but… it isn’t the TRASHHH i originally signed up for))